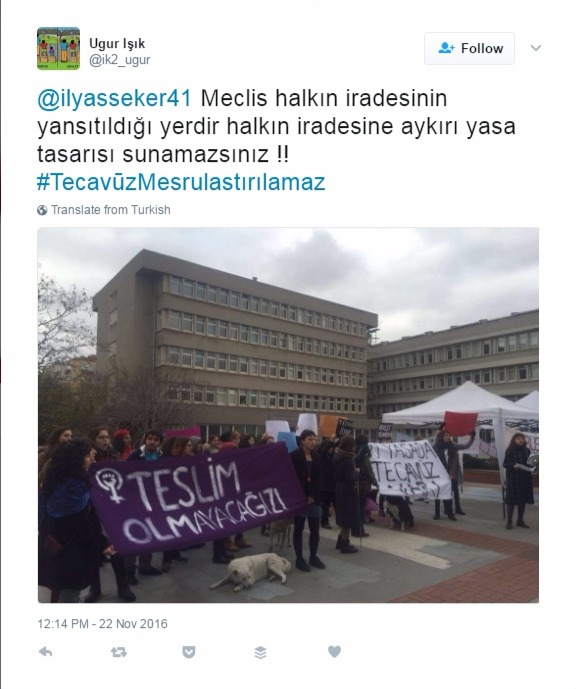 Led by a doctor, the We Will Stop Women’s Murders platform has grown since 2009 into a sprawling network of women nationwide, who often respond within hours to reports of an attack against a woman. They’re known to show up at hospital bedsides, in courtrooms and at family homes offering legal, medical and social services to women and their families.

This is all despite the increasingly authoritarian and Islamist rule in Turkey. Turkish President Recep Tayyip Erdogan’s ruling Justice and Development Party has put up roadblocks to progress since it came into power in 2002. The conservative, Islamist-leaning party has placed considerable focus on the role of women in their homes as mothers and caregivers—not as equal members of society—and has attempted to roll back hard-earned freedoms.

Turkey’s ruling party shocked activists and human rights watchers when it replaced the Ministry for Women and Family with the Ministry of Family and Social Policies in 2011, scrapping women from the ministry’s title entire ly. “This is much more than just a name change and signals a reduced emphasis on women’s rights,” Human Rights Watch wrote in a statement soon after the announcement, warning that the government was taking the spotlight off of women’s rights rather than working to improve them.

Erdogan himself enraged women’s rights activists in 2014 when he infamously claimed that women were “delicate” and not equal to men. “You cannot put women and men on an equal footing,” he said. “It is against nature.” A vocal opponent to abortion, caesarean sections and birth control (which he believes to be treasonous)—he has called on women to have at least three children, arguing that “strong families lead to strong nations.” Women who “reject motherhood” are “deficient,” he said in a June 2016 speech at a women’s organization, prompting more protest from We Will Stop Women’s Mur ders and other activists.