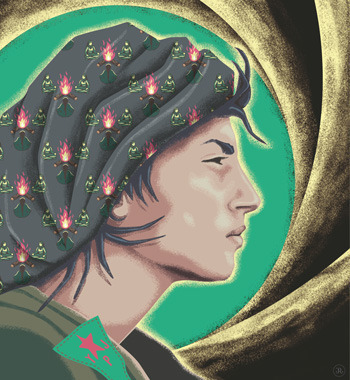 #vivelafeminism: The feminist army leading the fight against ISIS – @redpeppermag What it did not anticipate in Kobane was to encounter an enemy of a different kind – an organised, political community that was ready to defend itself courageously by all means necessary, and with a worldview that turns ISIS’s death ideology on its head. Arîn Mîrkan, a young, revolutionary Kurdish woman, would become the symbol of Kobane’s victory.

A fighter in the Women’s Defence Units (YPJ), she detonated herself in October 2014 near the strategically critical Mishtenur Hill to rescue her comrades and to capture the position from ISIS. This eventually shifted the battle in favour of the People’s Defence Forces (YPG/YPJ) and other co-operating armed groups, pushing ISIS onto the defensive.

After months of tireless fighting, which moved the US-led coalition to provide aerial military support, Kobane was finally free. Then, almost every day, as ISIS was forced back, videos emerged of villagers celebrating their liberation. People danced and smoked their cigarettes for the first time again; men shaved their beards with tears of joy; women burned and stamped on their black veils and chanted cries of freedom.

In the eyes of the fighters and the organised community, especially women, in the region, this epic war was perceived not as an ethnic or religious conflict, but as a historic battle between the concentrated evil of a male-dominated, statist and capitalist modernity – embodied by the rapist gangs of ISIS – and the alternative of a free life personified by the liberated woman in struggle.

The victory of revolutionary Kobane practically illustrated that the fight against ISIS did not consist merely of weapons, but of a radical rupture with fascism and the underlying frameworks that make it possible.