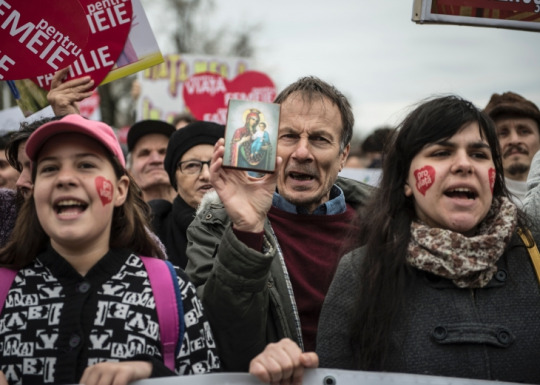 #vivelafeminism: How Romania’s feminists are fighting back Abortion has been legal in Romania since the fall of Ceausescu. Under his rule, it’s estimated 10,000 women died as a result of so-called illegal abortions. For post-communist Romania, legalising abortion was seen as a way to move forward from the horrors of the dictatorship.

Although abortion is now legal and free, the reality of accessing the procedure is much more complex. Terminations are only available in the first twelve weeks of pregnancy, and some private clinics only offer it up to ten weeks. Meanwhile, doctors can refuse to carry out an abortion. The result is that many women with an unwanted pregnancy are unable to access their legal right to a free termination. It’s a situation Ilisei has seen again and again:

“It can be very difficult for women to find a place where they can have an abortion, and in rural areas it”s even harder. We have had women calling us from different regions of the country, even in big cities, telling us they can”t find a hospital that offers the procedure. So on the one hand we have freedom of abortion, but then you go to the hospital and you are denied one. The doctors say it”s their choice to refuse. That”s not good enough. The hospitals need to make sure they have someone who can provide these services.”

It’s these existing difficulties which make the recent attacks and protests all the more worrying. If those demanding increased restrictions on women”s reproductive rights make political gains, then women will struggle even more to access the medical care and support they need to end an unwanted pregnancy.

But how credible are the threats to abortion rights in Romania? To measure that, you need to understand the power of the Orthodox Church and the Coalition for Family. Last year, the latter managed to secure a 3 million strong petition to permanently ban same-sex marriage via the constitution. As a result of the petition, all major political parties agreed to consider the change. This is not a fringe group.