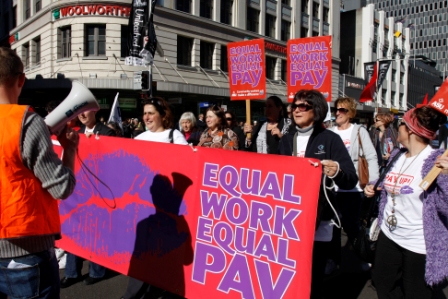 Less heartening is what happens to those women once they leave school. That’s where the seeds of inequality they’ve experienced all their lives really begin to grow fruit. The labor force worldwide is only 40% female, and that’s only a 1% improvement since 1990. Depending on what industries you’re looking at, the disparity is even more grim.

According to Kenny, “[T]he gap is bigger in the formal sector where firms are more likely to meet labor standards and minimum wage laws. Looking at the World Bank’s survey of registered businesses, only one third of the full time workers they employ worldwide are women.”

Much of this is tied to those same cultural attitudes that keep many girls from going to school in the first place. Even if girls do go to school, society says that’s the end of their progress when they become women, and they’re expected to return to the “feminine sphere,” which of course includes domestic work and child rearing.

For example, there’s a World Values Survey done every year on which one of the questions is “When jobs are scarce, should men have more right to a job than a woman?” Fewer people globally have agreed with that statement outright over time, but what has increased is the number of people who answer “neither agree nor disagree.” That means that, despite people not wanting to commit to outright sexism, they don’t feel comfortable committing to gender equality, either.

As Kenny points out, the percentage of people who answered “no” to this question “[W]as 40% in China a decade ago and is 37% now. In India, the number dropped from 28% to 23%, in the US, from 81%to 69%. And men remain particularly tepid in this regard: they are 16 percentage points less likely than women to oppose sexist hiring practices in the US, 12 less points in China, and 10 points less likely in India.”
Feminism around the world: economist analyzes global gender gap in the workplace despite feminist gains - @themarysue