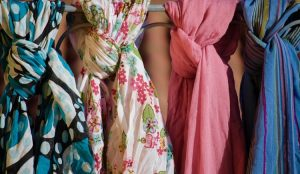 “Much of the sociological research on veiling in the United States, amongst converts and born-Muslims alike, imagines veiling largely as an individual choice. My own data suggested a more complicated process. From the women I interviewed and in my observations at the mosque I found that women in the process of converting were constantly being taught – through religious classes that new converts attended – about the proper way to be a Muslim woman. This unequivocally included wearing, at the very least, a headscarf. Rather than being a choice, wearing a headscarf here was clearly presented as a woman’s religious obligation. In their interviews, women who had converted to Islam explained the fraught process of learning to veil. One explained how she resisted wearing the headscarf for a while after she converted because she thought she looked ugly in it. She described her eventual ability to don the headscarf despite her initial misgivings as a triumph of Islam over Satan. She proudly added how she has overcome her vanity to such an extent that now she even incorporated the full-length abaya in her everyday life.”