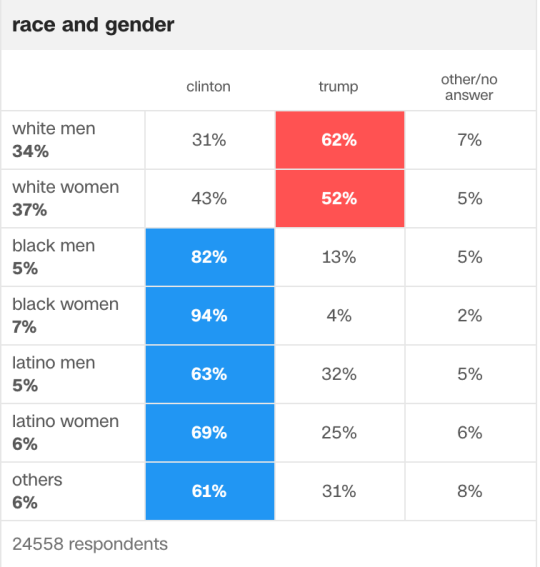 #research: bad chart thursday: the unbearable whiteness of being a Trump voter – @skepchicks Well, okay, the chart does have one problem. The far-left column does not clearly label what the percentages mean. Those are each the percentage of total voters each group represents. This is particularly useful in understanding that, say, 25% of Latina voters voting for Trump only comes out to about 1.5 percentage points of Trump’s total 46.21 (total as of exit polling—his final percentage was 46.4%) because it refers to 25% of the 6% of voters who are Latina. Taking this a step further, 1.5 percentage points is 3.25% of Trump’s total percentage of the vote (46.21%).

For comparison, white men make up 45.62% of Trump’s voters, and white women make up 41.64%. Trump received only 12.75% of his votes from people of color of all genders. And that is still lumping all races and genders together except for white people, who are separated by race and further subdivided by gender.

Clearly, white men are the largest group of Trump voters, with white women not far behind. Just one gender of white people makes up a much larger percentage of Trump voters than people of all genders and all other races combined.

But sure, if you just lump together everyone who is not a white man, then more of those “other people” (from the perspective of a white man) voted for Trump than white men did—less than 10% more, which is a remarkably slim margin when comparing one demographic voting group to ALL the others in the U.S..

Still, from the perspective of a left-leaning white man who treats everyone else as background characters, this calculus would no doubt be a comforting excuse to avoid having to address the role racism played in electing Trump as well as a convenient excuse to avoid confronting the racism on the Left and in himself.

Of course, this comforting excuse is not a legitimate one. Dishonest poll interpretation aside, a candidate who acts and speaks in racist ways is still racist even if people of color vote for him. Likewise, Trump’s misogyny didn’t suddenly disappear with the Magical White Woman vote.

But the sheer dishonesty itself illustrates the lengths some people will go to in trying to protect their own interests at the expense of others, even when the two aren’t mutually exclusive. The Left can address class issues as well as racism, misogyny, and other forms of bigotry and systemic discrimination. The much-maligned “identity politics” is not in conflict with developing a plan to help poor and working-class Americans, including—just not catering to—white men.

Identity politics did not in fact cause the Left to lose the presidential election. In fact, identity politics was a key winning strategy for Trump—white identity politics. Pretending people of color are responsible for the election of Trump—either through voting for him or by somehow causing the white backlash by asserting their own rights—is just white identity politics for the Left, a form of the white supremacy emboldened by Trump, just in different packaging. Articles like Bruenig’s show how convoluted the sales pitch has to be so that we can pretend we’re not racist when buying it, but it’s a bait and switch all the same.