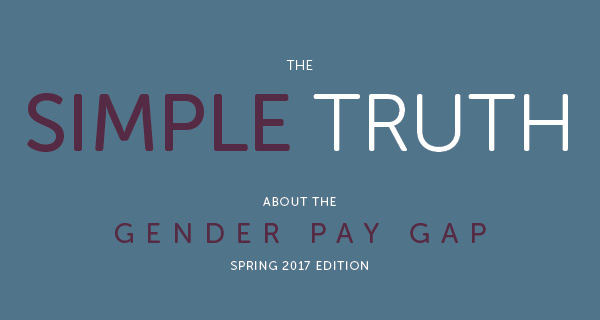 #patriarchiesrealign: The simple truth about the gender pay gap (Spring 2017) – @aauw From introduction to report:  In 2015, women… From introduction to report:

In 2015, women working full time in the United States typically were paid just 80 percent of  what men were paid, a gap of  20 percent (Proctor et al., 2016). The gap has narrowed since 1960, due largely to women’s progress in education and workforce participation and to men’s wages rising at a slower rate.

The gender pay gap has lifelong financial effects. For one, it contributes directly to women’s poverty. In 2015, 14 percent of  American women ages 18–64 were living below the federal poverty level, compared with 11 per-cent of  men. For ages 65 and older, 10 percent of  women and 7 percent of men were living in poverty (Proctor et al., 2016). Eliminating the gender pay gap by increasing women’s levels of  pay to those of  their male counterparts could cut the poverty rate for working women in half  (Hartmann et al., 2014).

Even after women leave the workforce, the pay gap follows them. Because women typically are paid less than men during working years, when women retire they receive less income from Social Security, pensions, and other sources than do retired men (Fischer & Hayes, 2013). Other benefits such as disability and life insurance are also smaller for women, because these benefits usually are based on earnings.

The impact of  the pay gap has also deepened in recent years as a result of  changes in family structure. Between 1967 and 2012, the proportion of  mothers bringing home at least a quarter of  the family’s earnings rose from less than a third (28 percent) to nearly two-thirds (63 percent). Today, 40 percent of  mothers with children under the age of  18 are their families’ primary or sole breadwinners (Glynn, 2014). As families increasingly rely on women’s wages to make ends meet, the gender pay gap directly affects men and children as well.

This guide provides key facts about the gender pay gap in the United States, along with explanations and resources. Information is organized around five common questions: