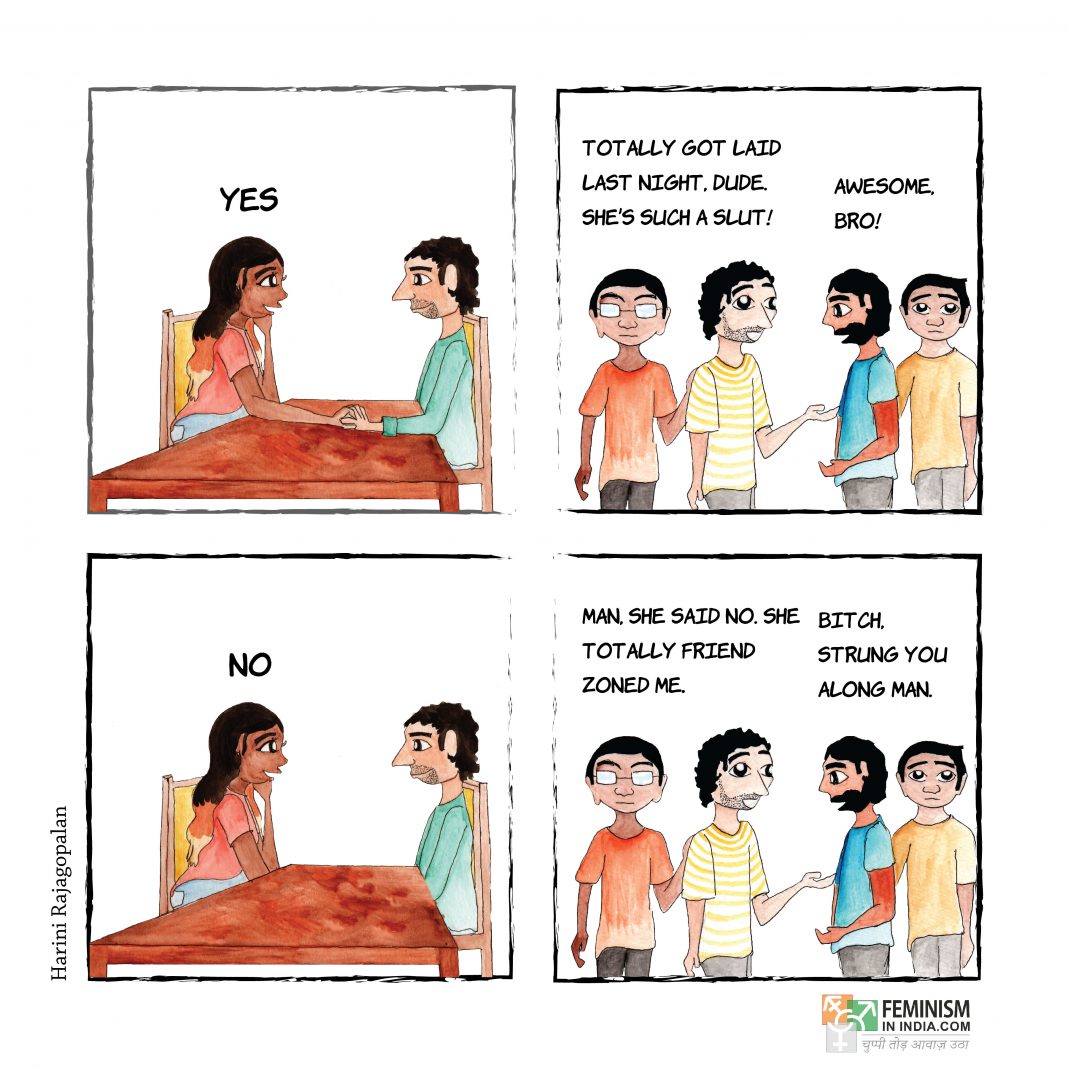 Slut shaming only needs the smallest of excuses to manifest itself. “When I was about 14, I shifted to a new school, and being small in figure, my kurta was tight-fitting as well. A girl came up to me and told me to stop seeking attention and to stay in my limits! Sexualising me at the age of 14 was so shocking, all I did was wear clothes that were comfortable to me.” says Eshita*, New Delhi, recalling a childhood experience.

Slut. Whore. Wannabe. Prostitute. Cheap. Bitch. Randi. All of these words have been used to shame women for anything and everything that they do – be it wearing an ‘exposing’ outfit or be it hearing about someone’s sexual experiences, or even seeing them roaming around with a member of the opposite sex.

[…] All of these experiences have some factors in common: that women’s bodies, from their faces to their legs, have been reduced to sexual objects, and that often the derogatory treatment that these women have received have been unsolicited and have resulted in obnoxious policing as well.

Side 2: The Friend Zone

What is the friend zone? It’s when you tell someone that you like them but they say they’d rather be friends. Except that now the friend zone has been reduced to a blame-game of objectification where women are constantly targeted for not accepting a man’s good behaviour and being with him in ‘return’. It is an expectation of sexual gratification as a reward for being “nice”. However, if this sexual/romantic gratification is denied, then the same person turns hostile and resentful to the other for not appreciating their behaviour.

The term is now used in popular language for men “striking out” with women, and it demonises platonic relationships as sad leftovers of interactions with women who couldn’t be “scored” for sexual or romantic relationships. The friend zone implies that men are merely using being “nice” as a facade to gain sexual gratification from women. This disrespects and reduces men’s qualities of being kind and respectful as mere tools to be used to get ahead with women.

The concept of friend zone also fails to consider consent and choice, and reduces relationships to a simple formula: the nicer you are, the more sex you must get. But the reality of relationships is that it is (well, hopefully) a two way street, where both partners must be able to want the same things in order to carry on with it. When we go around saying a woman is friend zoning guys, we mischaracterise the rejectee as a “victim”, when the real issue is that a woman’s choice over whom to be with is not respected. Her agency over her body is under attack when all that she is doing is simply expressing her wishes.