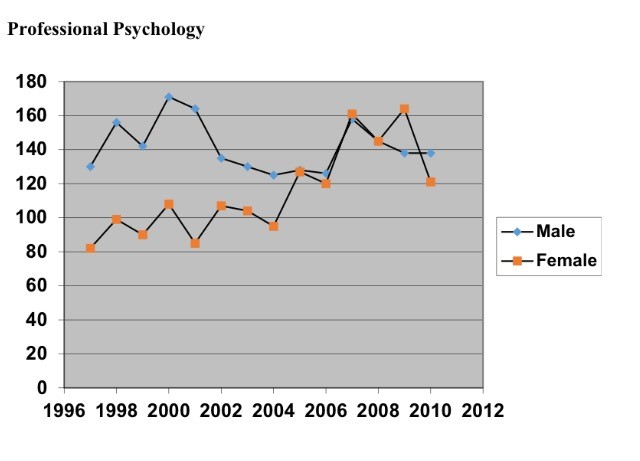 #guestpost: #research: What does the feminisation of psychology look like?

Previous research has used the notion of “feminisation” to describe the phenomenon of growing numbers of women into certain areas of research and work (Irvine & Vermilya, 2009). According to Ward (2002) the feminisation of the work force is characterised by the decline in male employment in manufacturing and the increase of female employment in the service sector. Male employment has traditionally been more organised and unionised while female employment tends to be less organised and generally part-time. Women often work part-time in order to care for children or engage in domestic responsibilities.

Psychology has over the last decades grown immensely in the participations of women in the field and a constantly increasing number of undergraduate and postgraduate students are women. In response to this claimed feminisation, some universities were found to favour male applicants, in order to counteract this progress (Goodheart & Markham, 1999). Critics have also expressed worry that the field of psychology might lose status and fear that psychologist’s income might decline as it becomes a feminised profession (Goodheart & Markham, 1999; Ostertag & McNamara, 1991; Keates & Stam, 2009). Keates and Stam (2009) state that women are considered a “problem” within psychology that needs to be solved. While feminisation is dealt with, and considered a problem, discussions rarely mention the masculinisation of higher education (O’Connor, 2008). The claim that feminisation of psychology is problematic or troublesome has been met with much resistance and authors such as Goodheart and Markham (1999) and Ostertag and McNamara (1991) have discussed this issue.

The number of women enrolled as students of psychology in America has increased greatly over time. In 1971, women constituted 25% of doctoral students. By the early 1990’s, women received 61% of doctoral degrees, and in 2001 in the U.S., women constituted the majority within all psychological subfields (Sentell et al. 2001). The numbers of women graduating with a bachelor degree in psychology were 77.8% in 2004, compared to all degrees awarded in 1966 being 40.8%. Similarly, in 2006, 71.3% of doctorate degrees were awarded to women while in 1958 this number was only 18% (Pruitt et al. 2010).The numbers of women who are involved in psychology as practicing psychologists have increased dramatically over the last couple of decades. Women’s professional status and development, however, does not appear to have increased as rapidly as the number of women in psychology (Ostertag & McNamara, 1991). On average, Ostertag and McNamara (1991) found that in 1983 American female psychologists made a yearly average of $5,700 less than their male counterparts who held the same degree. Worryingly, in 1987 this number appeared to have increased to a yearly difference in earnings of men and women of $6,700 dollars. Sentell et al. (2001) found that even when patient demographics, practice profiles, caseloads, and payment sources were controlled for male psychologists earned much more than female psychologists did. When calculated using the regression model, if female psychologists were paid according to male psychologist wages, they would earn on average $16, 440 more per year (Sentell et al. 2001). A contributing factor to the lower pay of women is that the fields that many women specialise in, such as educational psychology, are regarded as less prestigious and are characterised by lower pay and less funding (Ostertag & McNamara, 1991). Women are most likely to hold professorial positions in the Humanities and Social Sciences and it is common for these areas to be neglected in terms of funding (O’Connor, 2008).

Just as women’s pay is less than that of their male counterparts, women’s advancement in academia is also worryingly lacking behind. According to numbers in 1983, U.S. women held 19% of tenured positions which increased by less than 1% for 1985, and a further 1.5% in 1987 (Ostertag & McNamara, 1991). Interestingly, at a similar time in history (1990’s) white men comprised about 33% of the U.S. population and still constituted 85% of tenured professors (Howard, 1998). Women are not only underrepresented as tenured professors but also as editors of journals and members of editorial boards. In fact, women are underrepresented on editorial boards even in relation to their representation as authors (Metz & Harzing, 2009). Skinner and Louw (2009) found evidence for the fact that the feminisation of psychology appears more advanced in South Africa than it does in Europe or the U.S. Their 2009 study showed that the great majority of students, academics, and researchers were women, although men usually held the higher professorial positions. White women were also overrepresented with Black women being underrepresented.

In order to examine journals from the more general fields of psychology I choose Professional Psychology and Review of General Psychology. The results over time from Professional Psychology shows that women are much underrepresented as authors between 1996-2005. In 2005, 2007, 2008 and 2009 women publish in an equal amount to men. In 2009 more women than men published articles in the journal. However, the percentage of women is just above 54% and not near the 70% that women are estimated to constitute. In 2010 the number of women authors declined.

Teaching and educational psychology are believed to be one of the most feminised fields, if not the most feminised field, of psychology. Therefore, it was surprising to see that women authors were behind their male colleagues in regards to the amount of published articles in the journal Teaching of Psychology. Only in 2010 are more articles authored by women than men.

Another feminised field of psychology is counselling which I hypothesised would, together with educational psychology, show the least underrepresentation of women as authors of academic articles. When examining the field through looking at the journal Counselling Psychology Quarterly the field did not appear especially feminised. We can see a rise in the amount of women who publish in the later years, from about 2006 and on and that more women than men authored articles in 1998 and 2003. However, women are still underrepresented as authors in comparison to the number of women in the field.

Experimental psychology belongs to the “recently male-dominated” field of psychology together with occupational and organizational psychology, hence the examination includes the journal of Experimental Psychology and the journal titled Occupational and Organizational Psychology. When looking at the graphs we can see that both journals display a quite remarkable underrepresentation of women as authors of its published articles.

When examining the six journals based on how feminised previous research has found different fields of psychology to be, we can see that the numbers of men and women who publish in the two journals from the especially feminised fields do overlap a bit more than the other journals do. The biggest underrepresentation of women appear in Professional Psychology, Experimental Psychology and Occupational and Organizational Psychology. There are some indications that women publish more in the fields that are especially feminised but the results are not as clear cut as hypothesised.