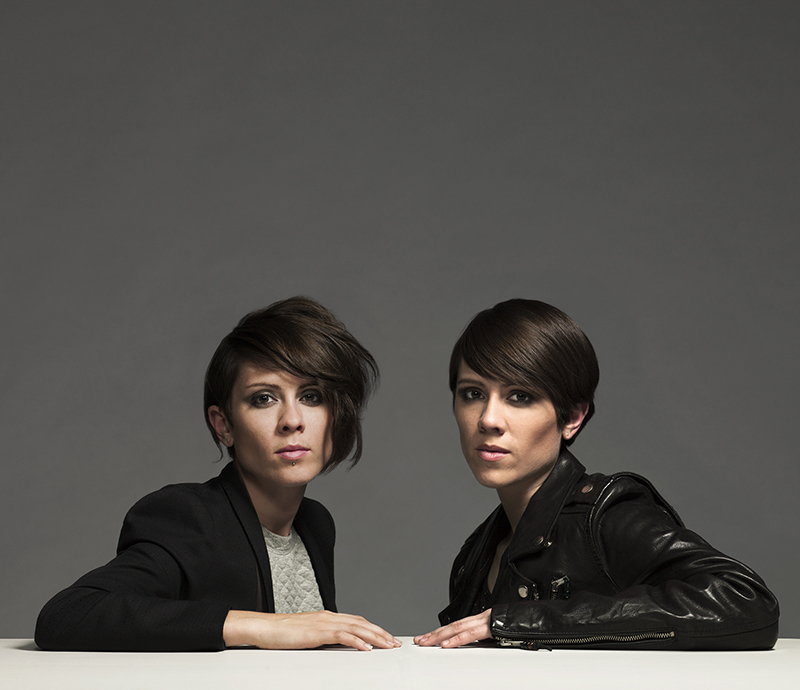 Fémina literally means woman in Latin, so you know where they’re coming from before you listen. This hyper-talented band isn’t just about the music, though they all sing/rap and play multiple instruments. They also use visual art and movement to get their message across. Because this band is Argentinian, there can be a language barrier with some fans, so they use visuals to make sure every fan can understand what they have to say.

Their lyrical content is about deep thoughts and realizations. They don’t shy away from the heavy stuff. They’ve said they want to be a voice for all women, that they want equality for women everywhere and that there’s still a long way for women to go to achieve that goal. In a world where lyrics can be stupid, repetitive and pointless, it’s important for a feminist band to make a real statement with their lyrics.

Though this band is more mainstream, it doesn’t mean they aren’t making important music. Tegan and Sara have been a feminist, queer-activist band way before it was “cool.” Though their sound has become poppier along the way, the lyrics are still as potent as ever. Not only are they women, they’re also queer, which has made their rise even more awesome.

They’re recognized as leaders and activists for both women and the LGBTQ communities. They’re passionate about the lack of women at music festivals and why Lilith Fair was so important. And they don’t shy away from challenging topics in their lyrics. Instead of covering up their sexuality with pronouns like “you,” they’re upfront about being lesbians. They’re icons for a lot of women — and with good reason.

The lyrics at the end of “By Your Side” may say it best: “Now I know I’m not alone/Got my girls, I’m not alone.” The vibe of this all-female band is all about dancing to music you love — at top volume — and spending time with the people you’re closest with. Warpaint is a very close-knit group themselves, one interviewers have called difficult because it’s hard to fit into their dynamic.

The bandmates also feel it’s hard to be political when you’re a member of a band these days — but that doesn’t stop them from speaking their minds. They aren’t afraid to talk about what they believe in. “[P]eople in the entertainment industry have the power to influence young people, but we’re also the most terrorized,” drummer Stella Mozgawa said.

And she’s totally right. One of the reasons Warpaint is on this list is their belief that you should be able to speak about what you believe in and engage in discussions. They know people in the entertainment industry are influencers, so they try and use their influence for things they find important.

The lyrics to the song “Slutmouth” are iconic, taking a direct swing at the box society tries to place women into: “I don’t really care about the clothes I wear/I don’t really care to brush my hair/I go to school every day/Just to be made a housewife one day.” The members of Girlpool create honest, blunt lyrics about real topics and experiences. They don’t shy away from things that are considered taboo, like gender expectations and sexuality.

This band’s members also represent a beautiful, platonic love story. Girlpool gets its strength from the power of female friendship and how well they can read each other. Knowing each other so well just makes the music even better. This is a band that was born — and continues to flourish — from girl power.

These bands should all earn a top spot on your playlist! Listen to some sweet tunes about fighting for gender equality to get you pumped up.