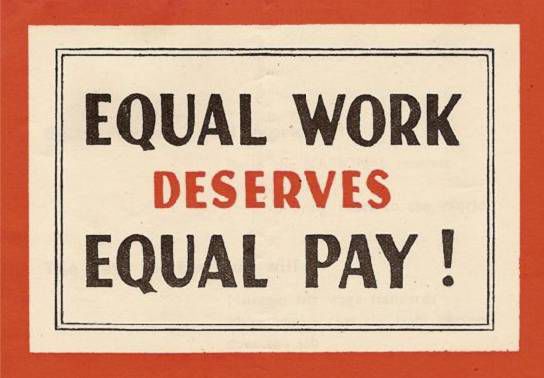 #guestpost: Debunking the myths: the #paygap is very real, by @kateharveston

People should earn what they deserve. It's a simple concept. It seems fair that if a white male makes a certain amount doing a given job, their counterpart with the same job and level of qualification should earn the same amount.

The women's rights movement dates back to the 1840s. It's been nearly a century since women earned the right to vote, a symbolic achievement in the fight for equality. The feminist movement, and other civil rights movements have made significant strides in the course of the last hundred years, and yet the wage gap remains visible evidence that we have not yet achieved equality.

Why is this? What makes it so challenging for a society that seems to acknowledge this bad circumstance to correct it? You may have heard the statistic that women make about 79 cents for every dollar that the typical male American worker makes. That is only the beginning. That number has risen from less than 60% since 1960. However today it's barely making any progress at all.

For African Americans, who earn on average nearly $18,000 per year less than whites, women experience about a 63% earnings ratio compared to white men. For Hispanic women, that number is 54%. Think it’s a matter of lack of education? It’s not, the ratio remains in place, and is even steeper for minority women with advanced degrees.

Confused by Myths and Lies

For an idea to become influential, people have to understand it. Women's rights advocates and other progressive thinkers have made it their mission to spread understanding. Understanding that the wage gap is real and that we still have work to do.

Just as with any point of contention, those who disagree have made efforts to spread misinformation. They have sought to rationalize the fact that nearly half of the population is compensated for their time according to a different standard, to equate that fact to a combination of construed half-truths.

You may have heard these ideas promoted. That women tend to make less because they choose to take time away from the office to raise children. That women decide to work part-time, thereby lowering their value or that they have failed to apply themselves and seek out better positions. That they are inclined to occupy less senior roles as part of some non-aggressive feminine nature.

It only takes a little research, however, uncover the treachery of these lies. Old white men comfortable in seats of power have employed the same tactic here that has resulted in the disenfranchisement of other minority groups, but the nation is waking up.

Doing so is discrimination, and today more Americans are taking notice and standing up for their right to equal ages. The Civil Rights Act wasn't just about race. It protects all employees based on sex, religion, nationality and other criteria.

Many states and employers have policies that reinforce your right to demand equal pay, and Title VII of the Civil Rights act makes it illegal for your employer to retaliate if you take action. The Equal Pay act of

1963 clearly states the criteria by which someone’s compensation can be measured as skill, effort, responsibility and working conditions. Any other criteria are illegal.

A Crucial Time for Progressivism

We are at a crossroads in the legacy of the progressive movement. Advances that came during the Obama administration through the help of politicians are threatened by the rise of new ultra-conservative thinking.

To be complacent now doesn't just threaten the movement's momentum. That is why it's so important to find examples of discrimination and take action to make them right. There is an end to this inequality, but it won’t come without much more hard work. Get educated, inform your friends, and take a stand for what is right.

ETA (link received on email): a further resource for your reading: Want Better Outcomes? Take a Hammer to Your Company’s Glass Ceiling (from Psychology@Pepperdine).