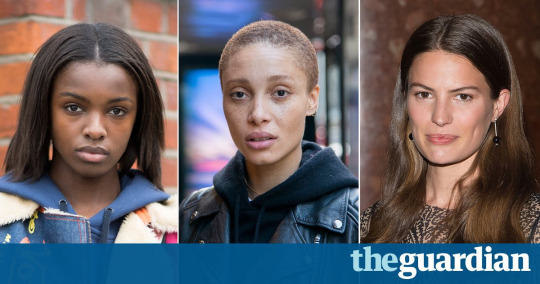 By feimineach / in #feminism, #sociology, #gender, #capitalismwilleatitself, #patriarchy, #quickhits / May 18, 2017

You can tell a lot about an era by its fashion models. In the 60s, the spirit of the youthquake was personified by the wide-eyed, Bambi-limbed Twiggy. In the early 90s, nothing said “sod the recession” like a glamazon who wouldn’t get out of bed for less than $10,000. In the ensuing two decades, Kate Moss represented not just a waifish appearance but a sphinx-like attitude, espousing the motto: “Never complain, never explain.”

But in the social media era, something new is happening. In the age of protest and fourth-wave feminism, it is no longer enough for models to slink down a catwalk anonymously: silence is starting to look seriously déclassé. The hot thing in modelling is not a look, but a viewpoint. It is having a voice and not being afraid to use it. It is TED talks and open letters. It is Instagramming pictures from protest marches and hosting debates about intersectionality. It is campaigning for charities and founding NGOs. It is outspoken. It is woke.

Socially conscious models are popping up everywhere. On the current covers of i-D and Love magazines is Adwoa Aboah, a woman whose relatively small stature (5ft 8in) has done nothing to thwart her towering success. As well as appearing on catwalks and campaigns for Dior and Versus Versace, Aboah runs an initiative called Gurlstalk; her Instagram page intersperses backstage fashion show photographs with moving posts on her struggle with depression.