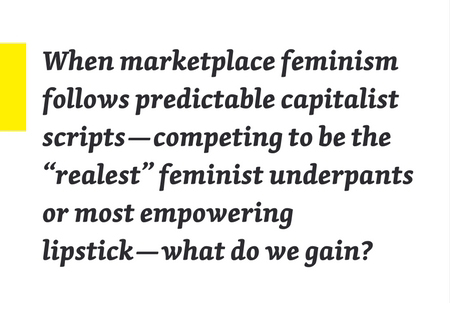 “Jennifer Lawrence’s New Dior Campaign Has a Feminist Message,” read the headline on VanityFair.com. In smaller type, it clarified: “It’s on her shirt.”

Nice one, Vanity Fair. Pointing out that the slogans espoused by celebrites trying on feminism as part of their personal brands are often backed up by little substance? Well played!

But this was not a joke, or satire, or even shade.

”[Maria Grazia] Chiuri’s first collection with Dior last year… paved the way for more political fashion on the runway during this past Fashion Week, specifically by using the simple-yet-bold conduit of the graphic tee. Models at Christian Siriano wore silk skirts with shirts reading “People Are People,” and Prabal Gurung included tops with sayings like “The Future Is Female” and “Revolution Has No Borders”…. It’s hard to deny Chiuri’s role as the bold leader who helped ignite that spark within the industry. And now, she has Jennifer Lawrence to help pass along the message.“

The designers did not coin the slogans on their t-shirts, and do not acknowledge their provenance as they co-opt them for high fashion. (The original “The Future is Female” was made by women’s bookstore Labyris Books in 1975 and became iconic in a photo of lesbian folkie Alix Dobkin; “We Should All Be Feminists,” of course, was the title of Chimamanda Ngozi Adichie’s 2014 polemic.) And they apparently see no disconnect in charging a frankly perverted amount for such garments—the Dior tee costs $710, while Gurung’s is $195—and no irony in artificially inflating the value of them to reflect the price of entry into high fashion’s rarified circles.

Closer to the other end of the fashion spectrum is a new ad campaign from discount-shoe mainstay DSW, one of which features a young woman also wearing a t-shirt that reads “The Future Is Female” (presumably not Gurung’s pricy version) alongside the slogan #MarchOn. Nasty Woman necklaces, feminist lipsticks, and even an "eyepowerment” campaign to raise awareness of Chronic Dry Eye (sponsored by pharma corporation Allergan): 2017 could be the year that marketplace feminism—the process whereby corporations, celebrities, and other commercial entities leverage the language of liberation in the service of shilling—finally goes full caricature.

But marketplace feminism is also fragile. It’s fragile because it requires the buy-in of those who, for the most part, see feminism only in the abstract.

[…] Marketplace feminism is admittedly alluring in a time when more than half the population is still fighting to be valued equally, to be paid like their male counterparts, to control their bodies, to simply exist in public. Marketplace feminism can yield powerful optics, like pussy hats photographed from above like a topographic map in shades of pink. It can bring virtual strangers together via enthusiasm for cool tote bags or enamel pins that spell out “FEMINIST” in bubble letters. It can offer a voice to those who can’t yet speak their minds or those who can’t speak at all.

But marketplace feminism is also fragile. It’s fragile because it requires the buy-in of those who, for the most part, see feminism only in the abstract. These forces—CEOs, venture capitalists, media executives, and more—will argue that business is apolitical, and for them it is. As a commodity, feminism is no different than any other trend, whether it’s crop tops or environmentalism. The fact that on the ground, gender equality may be a matter of life or death, is unimportant. Marketplace feminism is fragile, too, because, for all its potential, its reach and its influence demands a construction of feminism as individual success, privileging personal “empowerment” over harder-to-attain change—and, perhaps more distressing, suggesting that such empowerment can be available to all.