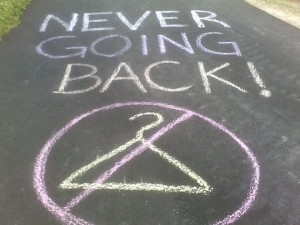 Below, read pre-Roe abortion stories collected from the Ms. Facebook page (and via msmagazine):

“In 9th grade a good friend became pregnant by our AAU coach. He threatened to kill her if she told how she became pregnant. Her parents were divorced and her mother had committed suicide a few weeks prior. She borrowed money from everyone and wrote a check on [her] dad’s account to go to [the] local abortionist. She died in [the] girls bathroom a week later. … She was a very talented artist and composed music. I had known her since third grade and even now, at 62, can hear her laughter and have a caricature of myself she drew. She had to be buried in a different cementary as was Catholic raised, as did her mom. After her death a group told the coach to quit or we would tell. We were 14-year-old kids doing the best we could for our friend. … She was just a baby herself.”

“When I was in a Midwest high school, we pooled our babysitting money to help our 16-year-old friend fly to Mexico, alone, for an abortion. Her parents thought she was staying at a friend’s home overnight. Imagine. I am 64. Never again—not going back.”

“My mom had one in Tijuana in the late 1960s. She told me she remembers watching the doctor use fire to sterilize the tools. She was OK, but terrified. She had given up a child for adoption a few years prior and couldn’t face that loss again. … I need to get the full story from her soon. I was afraid to ask for more details. It seemed like something she had kept hidden for so long. She only shared this with me when I was in my late 20s. Abortion must remain a safe and legal option.”

“I had a roommate in Madison, Wisconsin who became pregnant and, because in 1969 you couldn’t get an abortion in Wisconsin, the four roommates chipped in to buy her a plane ticket to NYC to have the abortion. She came home in fine shape but it was traumatic for her not to have a regional option and not having the funds as a college student to pay for it. So when I read about the closing of Planned Parenthood clinics so that underserved women don’t have regional options even for breast exams or Pap smears it is infuriating!”

“My submission is very short. It is about my Mother, b. 1924, d. 1971. She was found in a pool of blood on her cold white tile bathroom floor. Her mother found her. She was discovered, [she] did not die. Later, she had my sister and me. After her suicide at age 46, her mother told [me] about finding her daughter unconscious in a pool of blood.”

“In 1932 at the height of the Great Depression, my grandmother had one little boy and was five months pregnant with her second child. She was a lifelong, devout Catholic. My grandfather just came home to their tiny-two room apartment and informed her that he was leaving her for another woman. She had no job and was about to be evicted from her apartment. She was desperate, terrified and alone. A week after my grandfather left, she found a back-alley abortionist who performed [the] abortion and she very nearly bled to death. … [Then] she returned home and delivered a ‘stillborn’ (or so her parents thought) baby boy. She developed peritonitis and lapsed into a weeklong coma. When she regained consciousness and realized what she had done, she cried non-stop for two months. I was the only person she ever told; she told me that her grief and sorrow was so intense that she feared dying as she was terrified of having to face the child she aborted. She lived to be 102 and never once allowed herself forgiveness.”

“My mom spoke of aunts and other beloved female family members who could not afford and/or could not handle another pregnancy and child. All that was available to them was ‘kitchen table’ abortions done in secret with a coat hanger. The pregnancy was aborted, but these women died horrible deaths from peritonitis due to internal punctures and infections. They felt as though they had no choice and were desperate not to have more children. My mom was haunted by their stories and the fact they felt so trapped. It was such a loss for her and the family to lose these lively, strong women. This was in the 1930s and ’40s.”

“I’m a 62-year-old man but I know that my single mother had an illegal abortion in her teens, before I was born, that almost killed her. She couldn’t stop bleeding and couldn’t go to the hospital without facing criminal charges. All she could do was wait it out in a hotel room. Apparently, her boyfriend collected newspapers for her to sit on to collect the blood.”