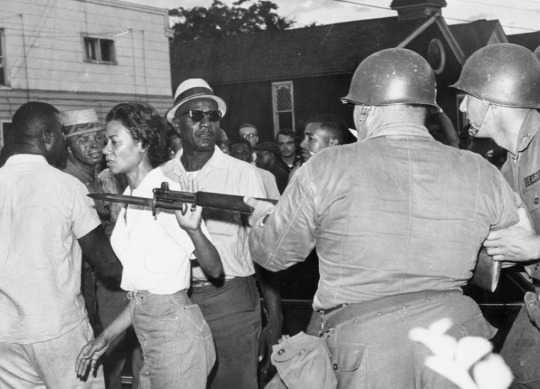 #vivelafeminism: “No matter what machines do to you:” Navigating anti-blackness in academic institutions – @thefeministwire

Image: Gloria Richardson pushing away a national guard bayonet in Cambridge Maryland in 1963.

From: EMERGING FEMINISMS, “No Matter What Machines Do To You:” Navigating Anti-Blackness in Academic Institutions (thefeministwire) :

It came as no surprise to me when, like robots, we were expected to show up to work the day Mike Brown was murdered, and like a robot I continued to attend classes, complete assignments, and pretend not to be overwhelmed by the fact that Black people were and still are under attack by white people and non-Black people of color.

A month after the murder of Mike Brown, I noticed Sojourner Truth’s name on the syllabus of my Women’s, Gender, and Sexuality (WGS) class. I also noticed that she was only one of very few non-white women listed as required reading. The systematic oppression of Black people manifests in a myriad of ways. Oppression can also look like a department failing to necessitate, and engage with, the work of Black scholars. I was both unsurprised and disappointed to find that after waiting several months before reading material written by a Black woman, the professors was never, in fact, interested in engaging with the work of Sojourner Truth. The discourse on Blackness is nonexistent in the classroom unless the course is in the department of African or African-American Studies. Simply put, the Women’s, Gender, and Sexuality department at Emory University does not care, in the slightest, about women of color, let alone Black women.

After having listened to the class speak about Emma Watson, who was not on the syllabus, for three consecutive days I decided to take a ten minute break from class. Before opening the door to leave I glanced at a sticker on the door that read “Safe Space.” Nothing is farther from the truth.

The Women’s, Gender, and Sexuality Department at Emory did not put Sojourner Truth’s Aint I a Woman as required text in their syllabus because they valued her work and intended to discuss the relationship between Blackness and feminism. The professor had no intention of requiring students to speak about or even read Sojourner Truth. I grew increasingly frustrated with the class discussion centered on Emma Watson’s address to the United Nations about feminism—an address that failed to acknowledge the plight or humanity of non-white, poor, disabled, Muslim, immigrant, and/or queer women.

As if there is a shortage of white women with a feigned interest in feminism.

As if the humanity of non-white women is something that is not worth acknowledging.

As if denying the humanity of non-white women is something that deserves praise.

After interrupting the class presentation on Emma Watson and demanding the conversation to focus on intersectionality and Sojourner Truth, the instructor apologized to the students on my behalf and dismissed class early. The irony lies in the fact that I, after providing a critique of white feminism for silencing Black women, was silenced by a white feminist. Instead of saying anything else, I pushed my chair in and left the class with the rest of the students.

I was subsequently reported to the department chair of WGS at Emory, the Office of Intervention Services, the deans, and the Office of Undergraduate Education (though I had an A in the class and was always two to three weeks ahead on the assignments) and was required to attend a meeting to discuss my “disobedience” at the Office of Intervention Services on October 16, 2014. While standing outside of the office of the administrators I was scheduled to meet with, I overheard their conversation:

A.S. “This little ghetto girl from Baltimore is coming in next.”

C.L. “She needs to take that behind back to Baltimore if she wants to be ghetto. She doesn’t need to be here she needs to be in Baltimore City Community College.”

After the women finished their conversation, they gestured outside of the door for me to come in. Each step I took towards the office took an incredibly amount of energy out of me because I was overwhelmed with anxiety and frustration.

“No matter what machines do to you:” Navigating anti-blackness in academic institutions - @thefeministwire