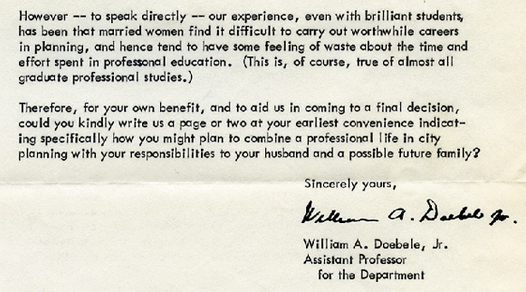 Excellent list of resources (part. if you’re working on Athena Swan or similar). From HASTAC.

In 1961, Phyllis Richman applied to graduate school at Harvard and received this letter of rejection.

The often unconscious and unintentional biases against women, including in academe, have been well documented in the autobiographical writings of authors such as Audre Lorde, Adrienne Rich, Patricia Williams, and bell hooks. But is the experience they document merely “subjective”? Several recent social science research studies, using strictly controlled methodologies, suggest that these first-person accounts of discrimination are representative, not simply anecdotal.

The studies aggregated and summarized below offer important policy implications for the traditional ways that we count and quantify the processes leading to hiring, promotion, and tenure. You cannot simply count “outputs” in making an evaluation of someone’s worth and reputation if there is a “biased filter” at the first stage of evaluation, prejudicing judgment at the outset.

These studies should be required reading of any administrators and faculty committees charged with decision-making. They should be required reading for award committess and Human Resources departments, for policy makers and accreditation agencies. As much as possible, these studies supplement anecdotal accounts of gender discrimination with empirical evidence of a gender bias that is unconscious and pervasive.

We include here a round-up of several of these recent studies. There is also an open, public Google Doc to which we invite others to add other relevant studies and responsible, careful, fact-checked annotations.

Before listing the studies, we would like to offer a number of talking points about what they, in aggregate, suggest.