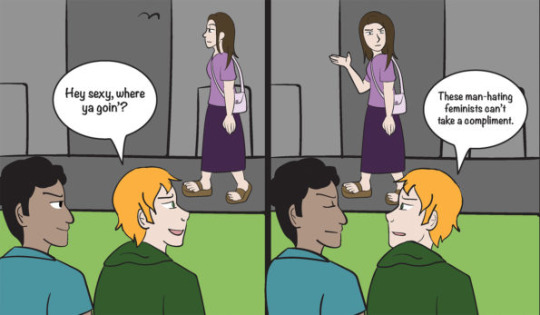 (We shouldn’t even acknowledge, I know, I know. But in this case I am going to disagree with the adage that there is no such thing as bad publicity. Name, shame, and ridicule, for we must.)

A recent movement called “Feminism is Cancer” has unfortunately gained some popularity among mostly young, white people. They claim that third-wave feminism, a.k.a. radical or modern feminism, is “cancerous” because it doesn’t “consider men’s rights.” While they try to address societal concerns, they’re bickering devolves into childish and ignorant whining.

The movement was created for privileged white men who don’t like their power being challenged. The entire platform of the movement is backed by people who have no idea how hypocritical it is. The movement not only is based off of a stereotype, but the name is almost as bigoted and ignorant as the people advocating it. “Feminism is Cancer” horribly uses cancer as a joke to illustrate its concern of feminism.

The movement’s name was coined by self-proclaimed alt-right “meninist” and critic of feminism Milo Yiannopoulos. You might recall the name as he was permanently banned from Twitter on July 19 due to his hate-speech inducing tweets and for a poll he posted asking if people would rather their child have cancer or be a feminist.

Supporters of this movement are quick to clarify that the more moderate first and second waves of feminism are not under attack here, rather they’re targeting the radical feminism of the modern third wave. Advocates of the “Feminism is Cancer” movement view radical feminists as sensitive, masculine-looking women. However, their main issue with them by far is that they are apparently man-hating.