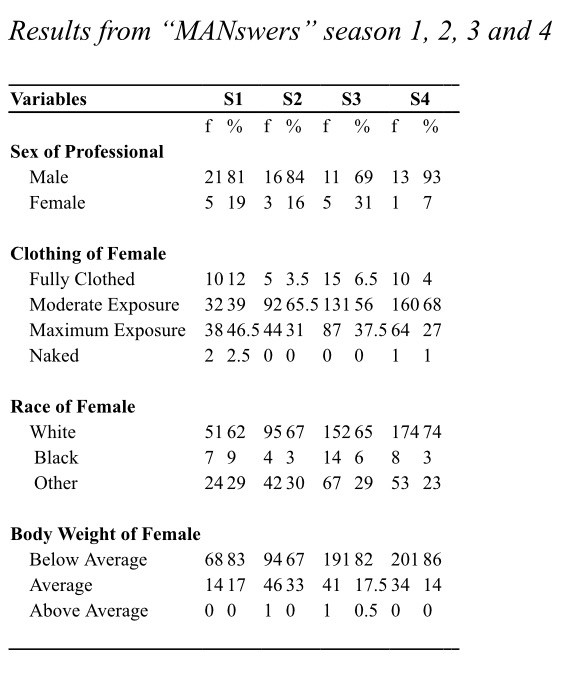 This is a guestpost by Hennie and Elin Weiss on their follow-up research on the TV show MANanswers. Their first piece of research is guestposted here.

In a previous piece for feimineach we wrote about an American television show called MANswers and its disturbing sexist portrayals of women. MANswers Facebook site describes the show as: “…a satire aimed at predominately male audiences with a wide age range, primarily 18-40. Questions of a comical nature are asked and answered which usually relate to women and tips on how to get them, sex references to males, and defense mechanisms in deadly & harmful situations, and also firearms. Specialists with Masters and PhD degrees are brought in and give information from which the viewer can learn”.

In each episode a male narrator poses questions such as “Which nationality is more likely to put out on the first date?”, “How can your beer gut save your life?”, “How can boobs wash your car?” and “What’s the secret to getting in your girl’s pants?”. The answer to each question is reenacted by male and female actors, while a typical MANswers show is approximately twenty minutes in length. According to their Facebook website a typical MANswers episode “has a magazine style format which discusses hypothetical questions believed to be the type men discuss. It has a narrator who talks about the topics and usually over a reenactment”.

While watching the show we noted that its portrayals of women were overwhelmingly negative and very stereotypical. Therefore we hypothesized that in MANswers:

We found that 78% of the experts consulted to answer questions for the episodes were male and only 22% were female. White women were portrayed more often than any other ethnicity (65%) and black women constituted 6% of the women in MANswers. When looking at the body size of the women in MANswers we found that 77% were below average weight, 22.5% were of average weight and 0.5% were above average weight (sample size of 517 women). Lastly, 35.5% of women were coded with maximum body exposure (very little or no clothing) and 58% were coded with moderate exposure.

In short, it appears as if the portrayals of women in MANswers is getting more extreme and stereotypical. Perhaps this is an attempt to make the show more “interesting”, from one season to another. But if we consider the ways in which sexism and stereotypical images of women impact how women feel about themselves and also how men treat women, MANswers only helps to maintain wide held stereotypes. Even though stereotypical and sexist images are often portrayed in media in comical shows that do not represent reality, or that makes fun of such stereotypes, they maintain real life implications. Men who are exposed to sexist or stereotypical images appear to react to women in a way that is troublesome. Rudman and Borgida (1995) found that men who had previously watched sexist advertisement material, compared to men who viewed non-sexist material, behaved more inappropriately to a female interviewee and selected more sexist questions to ask her. The authors further found that these men sat closer to the female in question and rated the female as friendlier but less competent. Heflick and Goldenberg (2009) extends on the topic and state that when focus is placed on a woman’s appearance, she if often viewed as less competent but also less human. Loughnan et al. (2010) further states that women who are objectified are often denied moral status and “mind”. The depictions of women in MANswers are, to say the least, troubling.