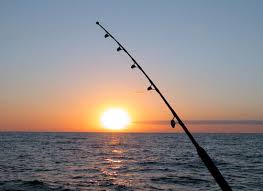 This is a guestpost by Elin Weiss. Elin has a Master’s degree in Women’s Studies. Her interests include feminism, gender stereotypes, the sexualization of women and the portrayal of women and men in media. More of her work can be found at the fwsablog, thefword, and metapshychology.

My partner is into pike fishing. Sometimes I go with him in the boat and fish for a little bit or read a book. I am not very interested in the sport as such but I like spending time outdoors together with him. Fishing has become increasingly popular and is a large industry. Living with someone who is interested in fishing means hearing a lot about the sport and also meeting others who too are interested in the sport.

My impression is that fishing is portrayed as a stereotypically masculine sport and is often depicted as a challenge taken on by “real men” that are able to reel in big fish in difficult weather and endure many hours of solitude on a lake. With this manly take on the sport I was not very surprised to hear that traditional put downs used on girls and women are also used to comment on fish; using words such as slut and whore to refer to the same fish being caught several times.

There are plenty of websites connected to fishing where members upload pictures and comments about catches, techniques, equipment and much more. On several occasions I have seen comments like: “Caught a nice fall whore”, ”I too caught the slut” and so on. Seeing that the really big pikes are female the jokes and comments often concern size of women, what one prefer their women and fish to look like, and so on.

When my boyfriend ordered fishing gear from the online store Tackle UK, and visited their Facebook site after the purchase, I was pretty troubled by the way men and women were portrayed and presented on the site. In short, depictions of men and women appeared to suggest that men are supposed to catch, conquer and dominated both fish and women and that men are superior to both and that women are clueless and best stay in the kitchen or simply just get out of the way, but looking pretty while doing so.

Every Friday the Facebook site has a ”Happy Friday” picture, an half naked girl holding a fish or equipment of some sorts, looking very suggestive in, usually, a small bikini. Every such picture has plenty of comments and a lot of ”likes” and ”shares” suggesting that this type of objectification for the pleasure of men is enjoyable and appreciated. Going through the ”Happy Friday pics” I found many nasty comments and very few comments that questioned the pictures. The questioning comments did not revolve around the fact that the pictures of the girls were objectifying but said things like: ”The far bank doesn't line up right either side of her butt, can't stand a digitally enhanced margin” or ”She should be at home doing the washing”. Other questioning comments were about women’s inability to fish saying things like: “If you asked her to handle the fish she wouldn’t know how” or ”She would probably just be in the way” and so on.

In one of the more awkwardly displaced photos there is a woman crouching on a bank releasing a fish, wearing high heels and a bikini. Here some of the comment make fun of this fact saying that the pic would be more believable if there was a reel attached to the rod, making fun of the fact that the woman is wearing high heels, but mostly there are comments saying that she would float if she fell in (having large breast), how they would like to catch that and so on.

Not all pictures of girls in bikinis are popular however. One of the pictures shows a very fit and great looking girl who does not have breast implants or large breasts. This pic is the least shared and liked one and it only has two comments, both complaining about the size of the girls breasts saying that: ”More tit on a sparrows kneecap” and ”It’s a bloke”.

Of course the men featured on the site are cool and capable and many of the comments on Facebook is about enhancing this feeling for the men who visit the page. How a big company like Tackle UK can have such a tasteless site is beyond me.