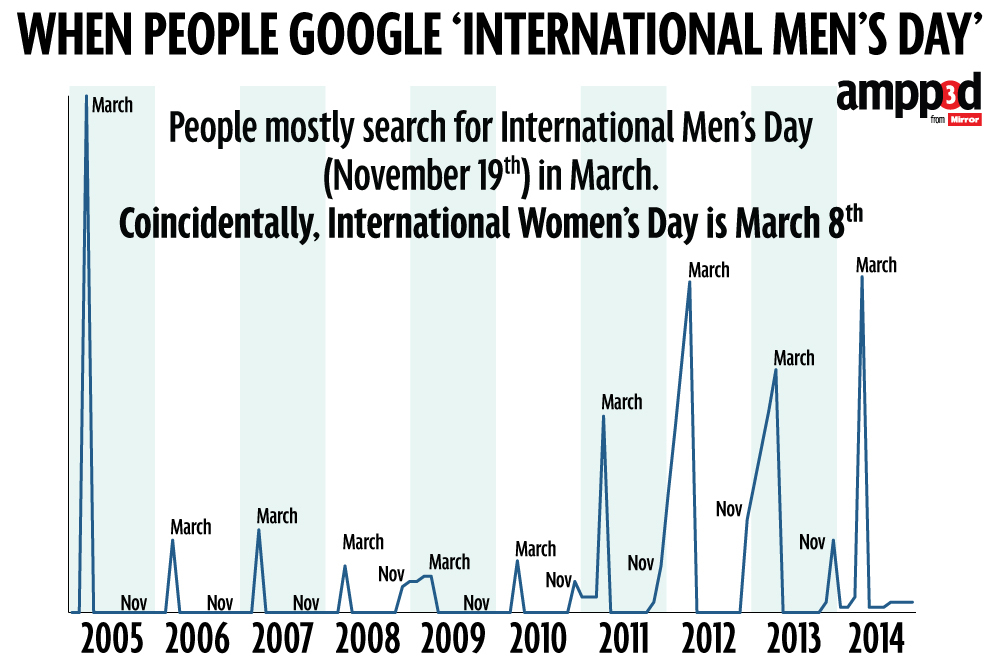 The reason for this particular association is the number of times International Men’s Day is mentioned in contexts other than the particular problems faced by men and the need to campaign about them. As this graph from The Mirror demonstrates, IMD is overwhelmingly searched for online during March. That’s when International Women’s Day happens. Hence the high proportion of it being mentioned in response to enquiries such as “Well, we don’t get our own day, do we?” or “So when are they going to declare an International Men’s Day, then?”

This Google spike has been interpreted as suggesting that a great deal of interest in International Men’s Day is not due to men worried about issues such as high rates of male suicide, lack of awareness of health risks or a society which encourages them to be less emotionally open, despite the vital need for campaigning on those issues. A lot of the interest in IMD – aside from the charities who find it a helpful focus for work amongst men – is in getting back at feminists.

For example, take the recent furore over an open letter sent to the management of the University of York by students and staff members. The university had declared it would mark the day in a statement which claimed there was evidence of men being effectively discriminated against in hiring practices for support staff roles, and citing statistics such as men’s higher chance of going to prison. The open letter points out that men are massively over-represented at higher levels of academia, and that the high numbers of women in support roles is connected to the past denigration of these activities as “just women’s work.”

In response to these concerns, the University retracted its press statement, and stated it would not mark the day after all. Theoretically, those who signed the open letter should now be pleased. Of course they are not. They have variously received online harassment, hate mail and abuse which included death threats and threats of rape. That’s for signing an open letter objecting to a university press release. They sent an official, public communication on a policy issue, couched in temperate and impersonal terms. As a result they received personalised and targeted abuse. How many of the organisers of International Men’s Day events would you guess receive sexually threatening emails for their activism?

To see International Men’s Day as an opportunity to campaign for more men to be awarded certain jobs, or to lobby for additional funds for men’s interests, is to misunderstand gender equality. The feminist movement is not the lobbying group empowered to speak on behalf of female citizens, which needs to be balanced by an equivalent group which seeks to amass privileges and resources on behalf of men. As I understand it, it is a movement of liberation for women. It provides an analysis of the ways in which women are disadvantaged specifically because they are women (which intersect with other categories such as race and class), and engages in political activity to reduce those disadvantages.

Women did not get together and decide that they could grab more of the world’s stuff if they got together and acted as a cabal. (Or if they did, they’ve kept the whole thing astonishingly quiet.) Feminism wasn’t a strategy invented to dispossess men. It was the result of centuries of women being treated as inferior, of economic and sexual exploitation, of misogyny and misrepresentation. Feminism treats women as a particular class of people not because that’s a better way to take over the world, but because men treated them as that class and subjugated them on that basis.

To look at the income disparities and rates of violence for men and women in our society, and decide that women are getting too good a deal, beggars belief. This is the politics of resentment, in which men realize they have lost some privileges and become outraged about it. Not their rights, but their privileges. They are outraged about being treated equally with people who have traditionally been their inferiors.

Otherwise why the threats of violence to those who spoke out? Why the sexualised edge to the abuse? Why the insistence that female signatories to the letter be forced to see themselves as vulnerable and sexualised? The backlash reeks of men wanting to remind women that they are an inferior class of people. That they are “just” or “only” women. And that women can be victimised and silenced with impunity, as if they needed any reminders.

If International Men’s Day is to do any good, it needs to foster discussions which discuss specifically male problems without ever blaming women. When men avoid going to the doctor because of macho stereotypes, or are sent to prison for violent crimes, or leave school with fewer A grades, women didn’t do that to them. This could be a day for taking stock of men’s lives, reflecting on how we can remake images of masculinity in ways which don’t harm either men or women. That might go some way towards solving men’s problems. But it’s crucial that discussing men’s experiences doesn’t slide into demanding more concessions and complaining how women have taken things from men.

I didn’t publish this piece on International Men’s Day. I couldn’t see the point of a “hot take” on the subject, and I’m not that keen on the idea of a day of celebrating “men’s contribution” to society, or praising men’s “honour”, as the organisers suggest. Every other day of the year there are people who work on increasing gender equality, breaking down harmful stereotypes and reducing the violence which scars our culture. Those people are women, and they’re called feminists.