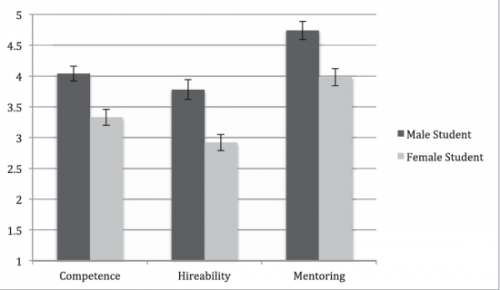 #todayin sexism: #research: John vs. Jennifer: A Battle of the Sexes

More research evidence on the bias towards male applicants in science. Respondents were asked to rate students with identical job applications - half were for an applicant named “John” and half for an applicant named “Jennifer”. The results showed that: “with statistical significance, both male and female faculty at these institutions were biased towards male students over female students.”

If one were to peek into Yale’s science classrooms, it is unlikely that he or she would report any gender disparities. In class, there appear to be an equal number of male and female students, and both genders seem to engage equally during lecture. One would assume that scientists, who are trained to think objectively, are completely immune to gender discrimination. However, a recent Yale study by Corinne Moss-Racusin and colleagues suggests otherwise.

The researchers created a fictional student and sent out the student’s application to science professors at top, research-intensive universities in the United States. The professors were asked to evaluate how competent this student was, how likely they would be to hire the student, how much they would pay this student, and how willing they would be to mentor the student. All of the applications sent out were identical, except for the fact that half were for a male applicant, John, and half were for a female applicant, Jennifer. Results showed that, with statistical significance, both male and female faculty at these institutions were biased towards male students over female students.

[…] The implications of this study are alarming, not only for women looking for a professional position in STEM fields, but also for the entire field of science. Moss-Racusin emphasizes the importance of mentoring by stating, “if you look at the paths of successful women, there is one thing they have in common by and large: they all had good mentors.” However, as the study shows, because scientists are less likely to offer women mentorship, the potential contributions of women to science are limited. Meg Urry, Chairwoman of the Department of Physics at Yale, describes the dilemma perfectly: “We have to diversify the profession before it clones itself out of existence.” The only way for science to progress is if we have the broadest and best possible input of brains. However, this progression is impossible unless scientists can find a way of avoiding the gender bias altogether.

today in sexism: research: John vs. Jennifer: A Battle of the Sexes