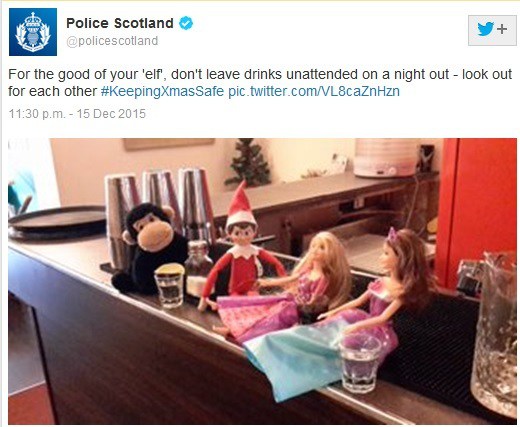 It’s that time of year again, the Christmas lights are on, the shops are heaving and we need to start watching our drinks in pubs. Police Scotland have launched their seasonal “don’t take risks” campaign with an ad about drink spiking and protecting yourself. Sure, it doesn’t mention the R word, but it’s all about not leaving your drink unattended because… if it’s not about rape then I don’t know? Someone might drink it?

I’m getting pretty sick of writing/talking/arguing that preventing rape isn’t actually the victim’s responsibility. But here we are, talking about drink spiking and protecting your drink. Seriously, police, stop it. I know you’ve got so much better at this not blaming victims thing, after all, you tell us often enough that women should come forward and report crimes, but really… you are not doing yourself any favours with this. I know, I know, you’ve used a festive pun, and not even mentioned sexual assault, but it’s not a flight of fancy to make the links between drink spiking and sexual assault.(If it really is an ad about taking care of an elf because they really don’t cope well with drink, then huge apologies.)

The reason feminists ask public bodies and others time and time again to really think about how they talk about alcohol and responsibility is because we live in a culture where society thinks it’s women’s responsibility not to get raped. Any sniff of alcohol throws everyone in a tailspin about whose fault it really is (spoiler: not the perp). Never mind the impact this has on reporting or conviction stats, the real problem with this “risk minimisation” approach is that it stops women from healing and it keeps rapists raping.

© and read the rest of this piece: The F-Word