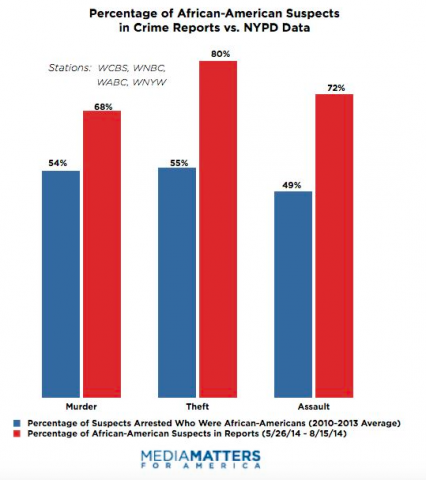 According to a new study by Media Matters for America, four New York City television stations consistently reported crimes by black people at a higher rate than their arrest rates. (Chart to the right/ below.)

Between August 18 and December 31 of last year, WCBS, WNBC, WABC, and WNYW (Fox) over-reported murders, thefts and assaults at rates that were inconsistent with NYPD statistics. Over the past four years, NYPD statistics show that black people were arrested in 54 percent of murders, 55 percent of thefts, and 49 percent of assaults.

But during that same time period, 74 percent of murder, 84 percent of robbery and 73 percent of assault suspects shown on the city’s four major networks were black. WABC aired the most disproportionate number of black criminal suspects while WNYW aired the least.

WNYW aired 41 crimes stories with black suspects while WABC ran reports with 212 suspects during that four-and-a-half-month period; WCBS and WNBC each ran stories with 140 suspects.

Given that New York City is the largest media market in the U.S and is the media center of the world, the results of this study are very disturbing. The pattern is both unmistakable and, from black people’s point of view, intentional.

Ignoring errors in crime statistics and arrest rates for a moment, this does seem to be excessive media focus on black suspects.