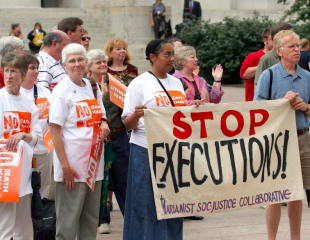 #research: Support for the Death Penalty at Lowest Point in 40 Years

Support for the Death Penalty at Lowest Point in 40 Years.

While most Americans still favor the death penalty for those convicted of murder, support for capital punishment is lower than it has been in 40 years, according to the Pew Research Center.

Of the two major parties, Democrats have been the leading group opposing capital punishment over the past two decades. Right now, according to Pew, over 40 percent support the death penalty and 56 percent oppose. In 1996, 71 percent of Democrats were pro-death penalty while 25 percent opposed it.

Republicans, on the other hand, haven’t shifted much over the years in their opinions about capital punishment. Seventy-seven percent of GOPers support the death penalty, a decline from 87 percent in 1996. Over the same period, Independents’ support for the death penalty has dropped 22 points, from 79 percent to 57 percent.

When asked about the morality of capital punishment, 63 percent of those polled said it is morally justified when someone commits murder; 31 percent disagree, even when murder is committed.

View this post on AlterNet.org, where it was first published (posted via feedly/ ifttt).