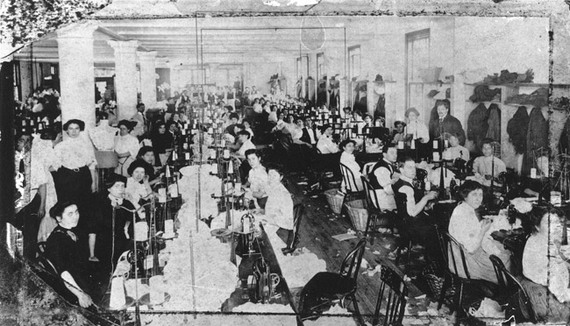 #picturethis: #anonymouswasawoman: #HERstory: women and the sidewalks of New York

New York sidewalks and chalk have been partners with the city’s women for generations. Setting the scene for childhood games of hopscotch and jump rope, chalking on the city’s pavements is a ritual of growing up female in the city. New York sidewalks also bear the weight of the city’s footsteps and the hopes and dreams of New York women. So too, they bear the weight of dreams unrealized or cut short, however light or fleeting the step of the dreamer. In this way, New York’s sidewalks link generations of women in the city, their hope and their despair.At the turn of the 20th century, New York’s fashionable women strolled along the sidewalk of the city’s shopping district, Ladies’ Mile. Here, women admired displays of the latest styles of shirtwaists, a type of blouse that epitomized the modern American woman, in department store windows. Poised and fashionable, a woman wearing a shirtwaist was the ideal modern woman. But her stylish figure came at a price that was paid by other women working long hours for low wages in the city’s miserable sweatshops.

At the Triangle Shirtwaist Factory in Lower Manhattan, women sewed shirtwaists six days a week. Around 500 women were crowded into three floors behind long rows of sewing machines. On March 25, 1911, shortly before closing on a Saturday afternoon, fire broke out.Workers at the factory found their path to escape blocked by locked doors with only a single fire escape. Management fled the factory without warning those who toiled in crowded and unsafe conditions. Firefighters arrived with ladders that were too short to reach the eighth, ninth and tenth floors where the fire raged. As firefighters and police watched helplessly, women found their only choice was to perish in the flames or jump from the windows and plummet to their deaths on the pavement.That day, 146 workers, mostly young immigrant women and girls, died in the fire. The youngest of the victims was fourteen years old; the oldest was forty-three years old. On April 5, 1911, over 100,000 New Yorkers took to the streets in pouring rain for a symbolic funeral procession. On the sidewalks of the city, nearly half a million more watched and grieved.Those sidewalks, where once thousands mourned, are now the focus of Ruth Sergel, a New York City artist. Using the city pavement as her canvas, Sergel has devised a way to honor the lives and dreams of these women who perished in the Triangle Shirtwaist Factory Fire. Sergel organizes Chalk, an art project that she labels a “public intervention” in which the struggle for social and economic justice continues for today’s garment workers.In Chalk, volunteers use colored sidewalk chalk to inscribe the name and age of each woman on the pavement in front of her home. A small sign is taped to her building, asking New Yorkers to remember her life, the tragedy of the fire and the continued fight for economic justice for all women. It’s a ritual repeated each March 25th, the anniversary of the tragedy. Through Chalk, one day each year, these women become again, however briefly, part of the humanity that treads the sidewalks of the city.