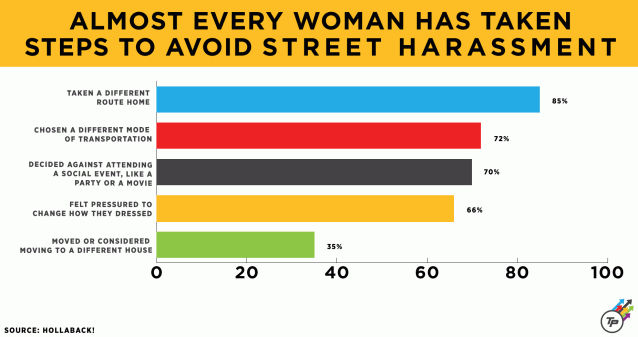 #maleficentmisogyny: This Is What Women Are Forced To Do To Avoid Street Harassment

Today in misogyny: This Is What Women Are Forced To Do To Avoid Street Harassment

“One of the ways that rape is used as a tool to control people is by limiting their behavior,” Rebecca Nagle, one of the co-directors of an activist group called FORCE: Upsetting Rape Culture that challenges the societal norms around sexual assault, told ThinkProgress in an interview last year. “As a woman, I’m told not to go out alone at night, to watch my drink, to do all of these things. That way, rape isn’t just controlling me while I’m actually being assaulted — it controls me 24/7.”

The street harassment that plagues U.S. women in public spaces has far-reaching consequences for those women’s personal lives, according to new survey data released by the international nonprofit Hollaback!.

The survey, which polled more than 4,800 people living in the United States, found that the threat of street harassment results in a heightened level of fear and anxiety that can end up distracting women when they’re at work or school. It also leads many people to change their behavior in ways they otherwise wouldn’t have.

Some individuals even experience professional consequences. Thirty-four percent of respondents said that dealing with street harassment has made them late to school or work. About eight percent have resigned from a job because of harassment.

This isn’t the first evidence to suggest that Americans are routinely being harassed in public. According to the Centers for Disease Control and Prevention (CDC), “non-contact unwanted sexual experiences” — which is a category that includes catcalls from strangers — is the most prevalent form of sexual violence experienced by both men and women. Last year, research released by the advocacy group Stop Street Harassment estimated that 65 percent of American women have experienced unwanted attention from strangers on the street.

Image credit: ThinkProgress/Dylan Petrohilos
Read the rest of this piece on ThinkProgress, where it first appeared.