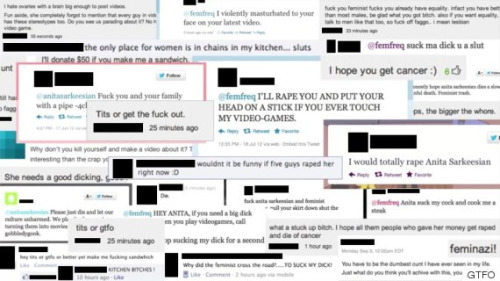 #maleficentmisogyny: the awful truth behind the sexual harassment of women gamers

“You can see it getting progressively worse and worse. […] I’m not a gamer, so when he sent that to me I was just shocked — like a lot of people would be. I wanted other people like me, who are not gamers, to know that this is happening.” The Awful Truth Behind Sexual Harassment Of Women Gamers

Despite lots of what you may have heard to the contrary, the abuse of women gamers is as bas as ever. Above is a compilation of some of the tweets gamers receive. They’re part of Shannon Sun-Higginson’s film about the sexual harassment of women gamers – GTFO.

From huffpo (emphasis added): Speaking on a panel at indie game convention PAX East in 2012, Jenny Haniver recalled what happened one time when she tried to tell a male gamer about a nearby adversary. “Shut up, bitch,” he said over and over again.

Haniver runs Not in the Kitchen Anymore, “a website which documents and examines her experiences as a female gamer through a collection of transcribed audio clips recorded while she games online.” Like many other women, she’s frequently harassed by male gamers because of her gender and has been for years.

That’s the arena Shannon Sun-Higginson steps into with “GTFO,” which is set to debut at this year’s South By Southwest Film Festival. Put into development long before Gamergate brought the issue of misogyny in gaming into the national conversation, the film details the casual abuse perpetrated by, in Sun-Higginson’s words, a “vocal minority” of predominantly white male gamers who are fearful of losing their place within the industry.

“Gamergate is just one example of something that’s just a much bigger and, unfortunately, common and systemic problem,” Sun-Higginson said in an interview with The Huffington Post. “I think a lot of outsiders saw Gamergate as this weird, crazy thing that happened. But for people who are experiencing it daily, it doesn’t seem like a fluke incident.”

#maleficentmisogyny: the awful truth behind the sexual harassment of women gamers