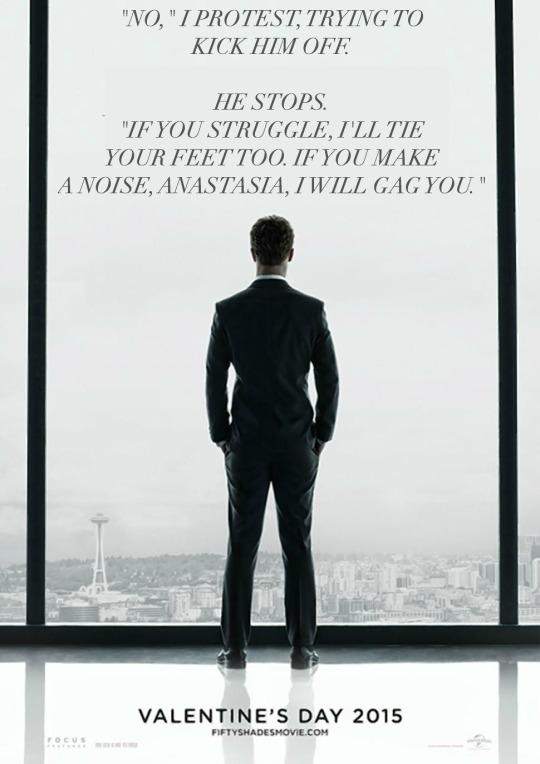 #afeministtakeon: #50ShadesofAbuse: Violence dressed up as erotica: Fifty Shades of Grey and abuse

Disclosure: I’ve yet to see this film (is it even out here?) but I have read the book. Regardless, I’m glad that I’m seeing a lot of posts on 50ShadesofAbuse before most people have seen the film. The fewer people taken in by it the better.

This one: the conversation:

[…]In a culture where women and girls are encouraged to learn that sexual pleasure equates to pleasing men, even when it compromises their own physical or emotional comfort, the pleasure/ pain dynamics described in much pro-BDSM writing don’t look that radical.

In a world where at least one in three women will experience physical or sexual violence, it hardly seems transgressive to sexualise power dynamics. It just looks a lot like a continuum of abuse.

While a “liberated sexuality”, where patriarchy is magically subverted through sex-toy aided orgasms, may sound like a fun idea to some, this position is naïve, at best, and cannot seriously address the broader issue of violence against women.

As Professor Karen Boyle has wryly observed about the Fifty Shades phenomenon:

Whether individual women find new pleasure from butt plugs is not the point here. Rather, the novel’s engagement with broader debates about gendered violence and power cannot be fantasised away.

So maybe just don’t bother with the film at all and use your movie ticket money as a donation to a women’s shelter instead. Because while this debate rages on, many frontline services helping victims of violence and abuse could desperately do with a real fundraiser.

A feminist take on... #50ShadesofAbuse: Violence dressed up as erotica: Fifty Shades of Grey and abuse