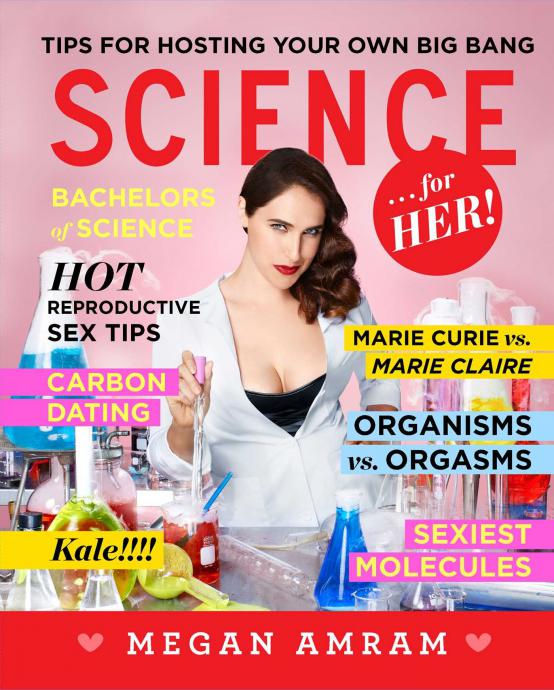 When I got a copy of Megan Amram’s new book Science… for Her!, I decided to run a little experiment. I host a weekly science night at my house and before my friends arrived, I placed Science… for Her! prominently on the kitchen counter. Then, I didn’t mention it to anyone. When my first nerdy friend arrived, she immediately gravitated to the book, looking over its bright cover in alarm. “What is this?” she said in disgust. It took paging through the book for a few minutes in horror to realize the whole thing was a joke.

The graphics and the style of Parks and Recreation writer Megan Amram’s parody book so closely mimic the aesthetic of many women’s magazines that it’s easy to believe, at first glace, that Scribner has just published an absurdly bad entry in the recent lines of girl power science products. It feels like Allure trying to make a sales pitch for Goldieblox.

Amram was looking to skewer the screechy, consumerist tone of mainstream women’s magazines she hits home. Amram is a comedy writer, not a scientist, so all of the science in the book starts at a level about as shallow as you’d find in the pages of Marie Claire and spirals quickly into fiction. Running through the book’s dozens of spot-on infographics and listicles is a through-line of desperation: women should learn about the world solely for the sake of improving their chances of snagging a man. The book becomes a bit like a bizarro diary entry of the fictional author, who schemes in increasingly severe prose about how to win back the love of one man who may or may not be her boyfriend. While the hysterical style is funny in chunks, I found it rather grating over the long haul. If you’re someone like me, who can barely make it through a Cosmo even when you’re trapped on an airplane, then this is a book best kept in place of honor in the bathroom or coffee table, where readers can guffaw over one page at a time.