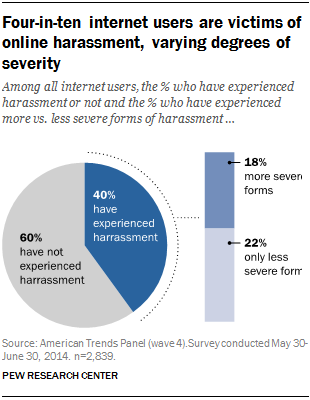 Timely. All graphs from Pew Research. Click for larger.

We’ve been talking about online harassment a lot in the past few weeks and now a timely new study from the Pew Research Center offers some hard data about the nature of digital harassment. The survey asked 2,849 internet users whether they have experienced harassment online. The results are sad, but not super surprising: 40 percent of people said they had personally experienced some kind of harassment. Men were actually more likely to report being harassed—but the type of harassment men face is different. Men are more likely to be called names or embarrassed online, while women are more likely to be stalked or sexually harassed.

Harassment is especially severe for young women ages 18-24. Fully 26 percent of young women say that have been stalked online and 25 percent have been sexually harassed. This isn’t just something that everyone can brush off—a majority of people said that harassment was upsetting to them and 15 percent of people said the harassment impacted their reputation. Among those who have experienced online harassment, 60 percent decided to ignore the most recent incident while 40 percent took steps to respond in ways like calling the person out, blocking the harasser, or reporting the harassment to the site.

The new study points out that harassment affects the way people interact in “neighborhoods” online—that framing is important because it portrays the internet as the important public forum it is, rather than suggesting that people who are being harassed should deal with the situation by just logging off. As Anita Sarkeesian has pointed out (over and over), when we work, live, and have significant conversations online, just opting out of the internet is not a viable response to harassment. Most harassment takes place on social networking sites, but a 16 percent of people reported being harassed in online games and 22 percent reported being harassed in comments sections. Significantly, 10 percent of people who responded to harassment said they reacted by withdrawing socially from the place they were harassed. This is something we should be worried about: people who are likely to be harassed can stop being a part of online conversations. We’ll miss out on their voices. That’s part of why people have recently been pushing back so vocally against harassment in gaming: letting the current culture of harassment to exist could drive women out of gaming communities.