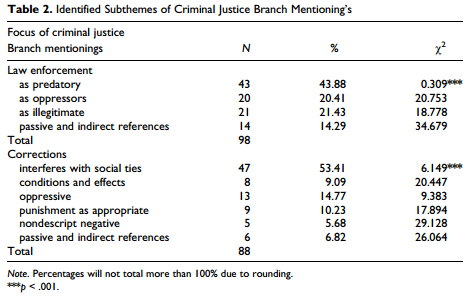 I’m no fan of hip-hop, it has to be said, but this is very interesting (soc. images):

Hip-hop music is frequently described as violent and anti-law enforcement, with the implication that its artists glorify criminality. A new content analysis subtitled “Hip-Hop Artists’ Perceptions of Criminal Justice“, by criminologists Kevin Steinmetz and Howard Henderson, challenge this conclusion.

After an analysis of a random sample of hip-hop songs released on platinum-selling albums between 2000 and 2010, Steinmetz and Henderson concluded that the main law enforcement-related themes in hip-hop are not pleasure and pride in aggressive and criminal acts, but the unfairness of the criminal justice system and the powerlessness felt by those targeted by it.