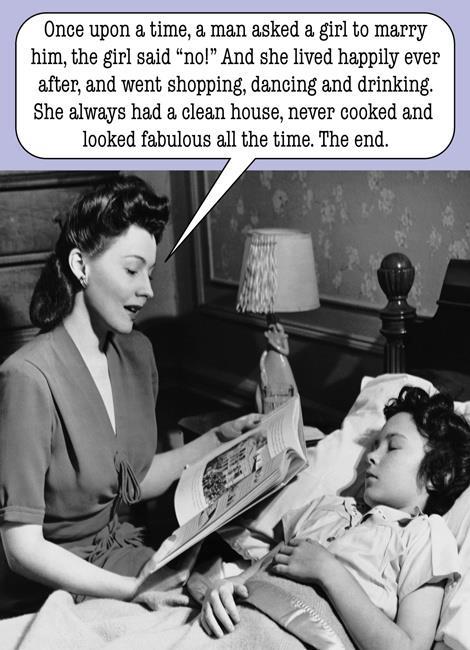 UNGRATEFUL WOMEN AND THEIR FEMINISM

I always listen to Radio 4 in the mornings on my way to work. I'm in that demographic now, don't you know. I'm nearly always leaving as 'Thought for the Day' begins. For those of you unfamiliar with Thought for the Day it is, as the link says, 'reflections from a faith perspective on issues and people in the news'. I think it would be more accurately described as patronising and sanctimonious reflections from God-bothers full of their own self-importance, but anyway. I find it insufferable.

This morning the Reverend Doctor Middle Class and Vaguely Disgruntled was doing his piece. He started off by recounting a tale of how he tried to help a young lady with her suitcase onto the bus. She declined his offer, and brushed his hand away when he offered again. This reaction, he blamed, on women's constant quest for equality. If it wasn't for the equality gained so far, he implied, women wouldn't think twice about accepting help from a man. He tried to redeem himself, of course, by talking then about the disparities in earnings of men and women - and in doing so 'approved' of our pesky feminism - and then came back to the quandary of women not allowing men to help them when they clearly need it.

Seriously, Reverend Doctor Middle Class and Vaguely Disgruntled? Really? If I give you the benefit of the doubt for a moment, and believe that you genuinely thought that telling a story about a woman 'in need' would be a good introduction to a discussion about equal pay rights, I have to tell you that you're a little naive. I know a lot of women - and I'm one myself - and I'm pretty sure that most of us don't spend our time declining offers of help from men because we're obsessed with equality. If you really need to know, I rather think that we women feel that it's intrusive to be approached by strange men offering help (or anything else), that it can often be intimidating to be approached in such a manner, and that we decline because we feel uncomfortable and we would rather not have you near us or our suitcases. Is that unfortunate? Of course it is. In an ideal world, we would all be helping each other carry our butterflies and rainbows around; in a realistic world, we react as we do because we're conditioned to do so by what we see around us. It's got nothing to do with equality, or its lack.

But I'm not going to give you the benefit of the doubt. I think that for all your talk of equal pay for the sexes and of narrowing the employment gap, you think we women have got too much equality already. You gave your game away when you mentioned that ungrateful young woman twice in three minutes. You're thinking, I'm sure, that she should have been happy to take help from you, the Big Man, instead of trying to assert her independence when she was so clearly in need. But the world, thankfully, doesn't work your way any more. Perhaps the next time you pipe up on Thought for the Day, you'll remember that it's not all about you, and that women don't spend  their waking moments trying to figure out how to get their equality points higher at the expense of people like you.

7 COMMENTS ON THIS POST To “UNGRATEFUL WOMEN AND THEIR FEMINISM”