#guestpost: #research: More on the underrepresentation of women in psychology journals

(Posted with permission from the author from the FWSA blog.)

In a previous post at the FWSA blog I discussed the underrepresentation of women as authors of articles in academic psychology journals. I presented the table shown below which demonstrates the number of women authors compared to male authors in seven psychology journals between the years 1997 to 2010. Among these journals was The Scandinavian Journal of Psychologywhich I hypothesised would show the highest representation of women as authors in comparison to the other six journals because of the Scandinavian countries progressive laws concerning work and family, which are believed to be favourable to women. The earliest common issue for the majority of journals were from 1997 and the analysis include issues between 1997 and 2010. All issues for each journal and for each year were systematically reviewed and the sex of the author was recorded on the basis of first name. Authorship was separately recorded for each year and then pooled together in order to carry out the comparison. Statistical analysis consisted of Chi-square with an expected representation of 30 percent for men and 70 percent for women (to reflect the estimated number of women and men in psychology). Significance was recorded for p<.001,p<.01 and *p<.05 where it applied, meaning that when the significance, as displayed by the number of stars () reflects the percentage that the results are reliable and that the results did not occur randomly or by chance. Therefore, a study with p<.001 displays high reliability of significance of findings. 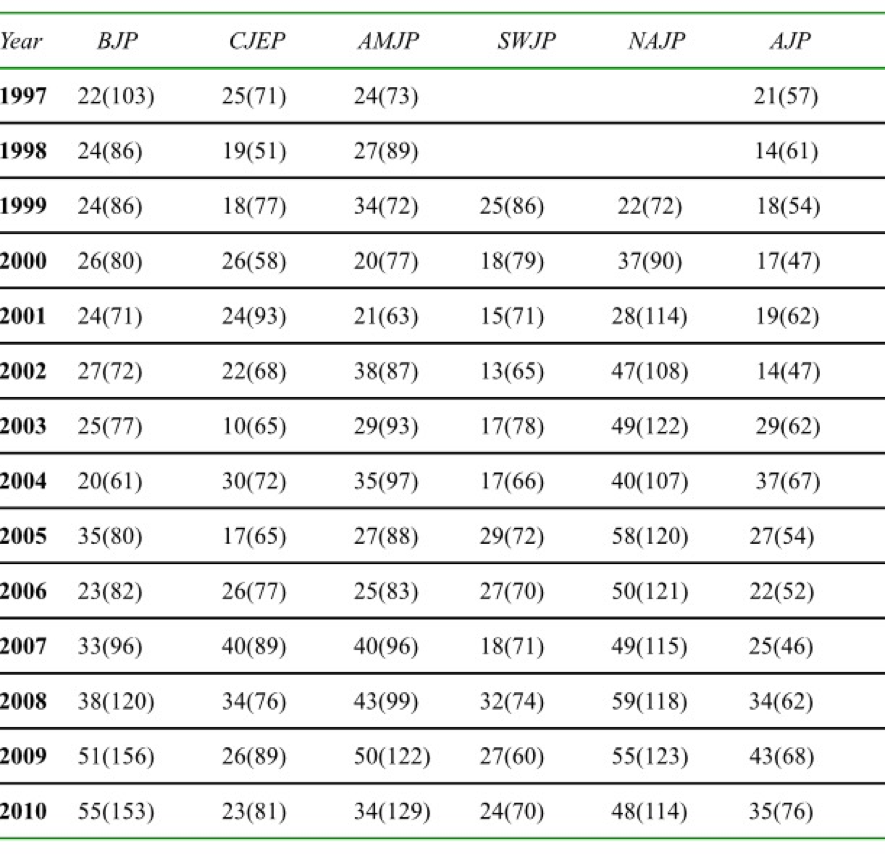 From the results, and in comparison with previous journals (a total of now thirteen journals) we can see that there are large differences in the representation of women as authors of articles in academic journals. When we look at the statistical analysis all journals underrepresent women based on the estimated numbers of men and women in psychology and all do so with statistical significance. Below we can see that all of the journals in this study had higher representations of women as authors than The Scandinavian Journal of Psychology. It remains the journal out of the thirteen examined that has the highest underrepresentation of female authors.