#vivelafeminism: “[Feminism] is not supposed to be fun. It’s complex and hard and it pisses people off” Zeisler – @MarcieBianco

Flipping excellent essay on the dilution of feminism to its apolitical, “choice is freedom” state. Instead of upending capitalism, we’ve enhanced it, and instead of smashing patriarchy, we’ve capitulated to it. This will be the most important short piece you’ll read today, folks. I could pullquote the whole damn thing. Pankhurst rages.

“Feminism’s recently skyrocketing profile is a reminder that the best way to constrain the power of a social movement is to commodify it” Andi Zeisler.

These days, feminism is on fleek. Touted by everyone from Dove to Barbie to Taylor Swift, consumer capitalism has made feminism sexy, fun, cool—and remarkably easy to claim as your own. But the price tag has been the meaning of the movement itself.

“The problem is—the problem has always been—that feminism is not fun,” Zeisler declares. “It’s not supposed to be fun. It’s complex and hard and it pisses people off. It’s serious because it is about people demanding that their humanity be recognized as valuable. 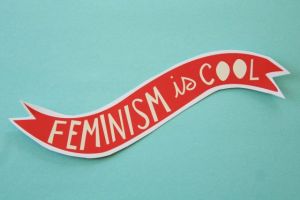 Bitch magazine cofounder Andi Zeisler describes this phenomenon as “marketplace feminism.” “Marketplace feminism is in many ways about just branding feminism as an identity that everyone can and should consume,” she writes in her new book We Were Feminists Once: From Riot Grrrl to CoverGirl, the Buying and Selling of a Political Movement. Tarnished by conservatives in the 1970s and 1980s who equated feminism with misandry and bra-burning, the movement has undergone an ideological shift to make it more palatable to the mainstream. This brand of feminism lite has been called a variety of things over the years, from “pop feminism” to “white feminism,” to my personal favorite (and coinage), “cupcake feminism.” Because the ideal feminist is the image of a woman double-fisting cupcakes. “Riots not diets!”

And yet, with all this talk of empowerment, women still cannot escape being objects for sale. Indeed, the cultural consumption of feminism can end up reinforcing sexist tropes of objectification. We are selling ourselves in order to sell our message.

“Rather than strengthening feminism from the inside,” Zeisler explains, “a rebrand is outward-focused, a recruitment effort to make feminism appeal to as broad an audience as possible by distilling it down to an image and a few words.” Refined by the Mad Men advertising age and then mass-produced by the Digital Age, political goals have been reduced to sugary sound bites.

© and read the rest: We sold feminism to the masses, and now it means nothing (quartz)

"[Feminism] is not supposed to be fun. It’s complex and hard and it pisses people off" Zeisler - @MarcieBianco