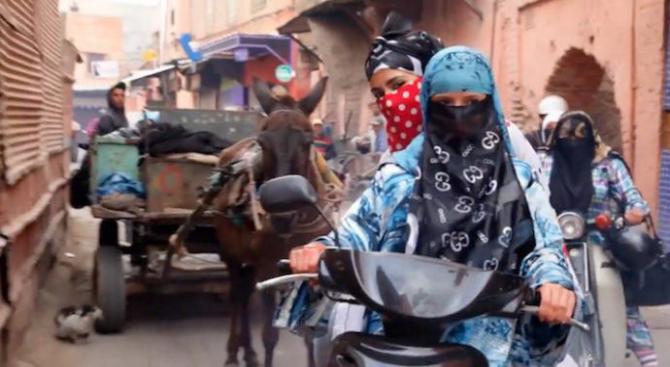 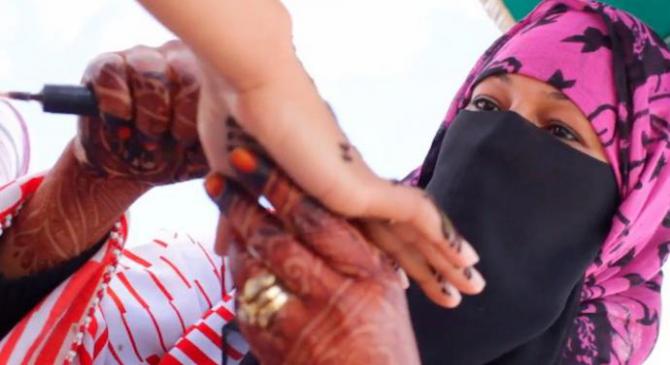 The opening scenes of Karima: A Day In The Life of a Henna Girl feature close-ups of her beautiful henna’d hands. We see the face of the girl in question only after we’ve seen her pull a red-and-white striped djellaba over her head, after she’s pulled on her black and white polka-dotted socks, and after she slips on a pair of babouches. And then, finally, the camera pans up to her face. Even then, we can see only her eyes as she adjusts her black niqab and a hot pink headscarf. A few minutes later, she’s hopped onto a bike and the camera follows Karima and her friends as they navigate the narrow alleyways of Marrakesh, Morocco. Their final destination is the massive marketplace, Jema’a El Fena, where Karima will set up shop with her colleague Anouar and henna the hands of tourists and patrons walking through the famous square.Karima, directed by the famed Moroccan artist Hassan Hajjaj, premiered last week to a packed theatre at the Los Angeles County Museum of Art. Hajjaj attended the debut of the documentary flanked by Karima herself. He’s been working in the art and music industries for over two decades, but when his photo series profiling the female bikers of Morocco (’Kesh Angels) debuted in 2014, his work became internationally recognizable, celebrated by the New York Times and The Guardian and also by fervent online audiences. I first came across his portraits of Moroccan Muslim women dressed in brightly colored djellabas and niqabs, sitting astride motorcycles and set against vibrantly patterned backgrounds while scrolling through Tumblr. In one photo, the women wear djellabas and niqabs emblazoned with the Nike logo. In another, their dresses were army camo, and their Moroccan babouche slippers were rendered in the iconic brown Louis Vuitton lettering. In all the photos, the women seem to stare with defiance at the camera, projecting an unspoken challenge to the lens. These portraits demanded to be reblogged. They were, as The New York Times called them, “dazzling.”

Rest on bitch, where these images were first published.