#research: It’s time for the demise of capital punishment in the US 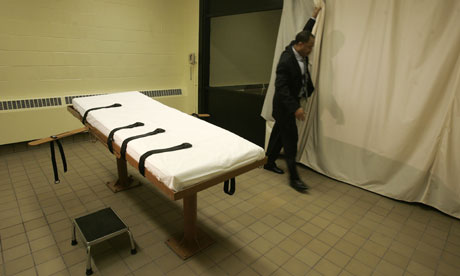 Inmate have spent more than an hour on gurneys during Ohio executions, waiting for officials to find useable veins. Photograph: Kiichiro Sato/AP

It’s 2012 and still we’re arguing for the abolition of the death penalty in the US. How does that happen?

2012 was a bad year for the death penalty in America, but a better one for humanity. Executions have decreased 75% since their peak in 1996, and Connecticut joined 17 other states and the District of Columbia in abolishing capital punishment. All in all, the United States justice system killed 43 people last year.

That our government punished “only” 43 people by lethal injection in 2012 is a macabre achievement, but represents a significant departure from the death penalty-happy 1980s and 90s, when hundreds of inmates were killed every year. Those of us who think it’s about time our country joined the ranks of civilized nations can only hope this trend continues. The United States is in the good company of China, Iran, Iraq and Saudi Arabia as one of the top five executioners in the world. Not to be outdone, we imprison more people than any other nation ever has – more than China, more than the Soviet Union at the height of the gulags. We have 5% of the world’s population, but 25% of the world’s prisoners. And we lock up more of our children than anyone else: more than 70,000 kids were in jail in 2010, and Texas alone has sentenced more than 400 minors to life behind bars.

Six million people are under “correctional supervision“ in the United States. More than half of those are in for drug crimes. And of the people who are in prison for drugs, 80% are there for possession. Billions of dollars in prison spending, much of it directed at private enterprise, means that a handful of businessmen are getting very wealthy on the mass incarceration racket. Prison in the US is not an equal opportunity placement. As Michelle Alexander details in her book The New Jim Crow, our mass incarceration system functions as a means of social control in much the same way that Jim Crow laws and even slavery did. Of black American men who don’t graduate from high school, more than half end up in jail. African Americans are 13% of the US population but comprise 40% of its prisoners.

Even putting aside the fact that our prison industry is essentially a systematic method of racial oppression, we should ask ourselves: what purpose does the death penalty serve? It doesn’t deter crime. It punishes a perpetrator, but does so with a sentence that can’t be undone. We can never know how many executed men were actually innocent. We do know that more than 100 death row inmates have been exonerated. We also know that our justice system is imperfect by construction, and that there is no way to ensure that no innocent person is ever convicted of a crime. In a flawed system, imposing death upon the convicted simply sets the stakes too high.