#maleficentmisogyny: ‘Purity Balls’ Get Attention, but Might Not Be All They Claim 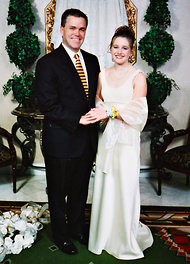 In 1998, in Colorado Springs, Randy Wilson threw the first “purity ball,” a formal dinner and dance at which he and other fathers signed pledges to protect the virginity of their unmarried daughters. This October, Mr. Wilson will host his 13th purity ball (they have been almost annual). And from the first ball to now, the Wilson family has made an industry of purity.
Ms. Carlson says there was no deeper meaning to the ball. “It was a chance to dress up and dance with my friends and hang out with my dad.” A field director for the Family Research Council, a conservative Christian organization, Mr. Wilson has promoted purity balls across the United States, and his Web site says they have been held in 48 states. He and his wife, Lisa, have written a book, and they sell a “purity ball packet” for $90.
Three of their five daughters also wrote a book, “Pure Woman.” One of those daughters, Jordyn Wilson Peppin, runs the Purely Woman School of Grace, a weeklong program where “ladies” can learn a godly path to “etiquette, grace and hosting.” The media have lustily promoted the Wilsons. The family has been featured on Anderson Cooper’s television show, in magazines likeGlamour, in many newspapers, including The New York Times, and in at least two documentaries: one, a Swiss production called “Virgin Tales,” was released this summer. But there is something fishy about all this media attention. [Read more: nytimes]

Well *of course* they are more than they claim. Shall we start with sexist and patriarchal? Only the daughters should “save themselves”, you know? Let’s move on then to the incestual and almost pedophilic nature of this practice. Why exactly are these fathers so obsessed with their daughters’ sex lives and what they do or do not do with their vaginas? And did I mention creepy? Dear god yes, the very, very creepy.
Tags: feminismsociologymisogynyreligionpatriarchysexismgenderwomen's rightspurity mythmaleficent misogyny
← Previous Post Next Post →